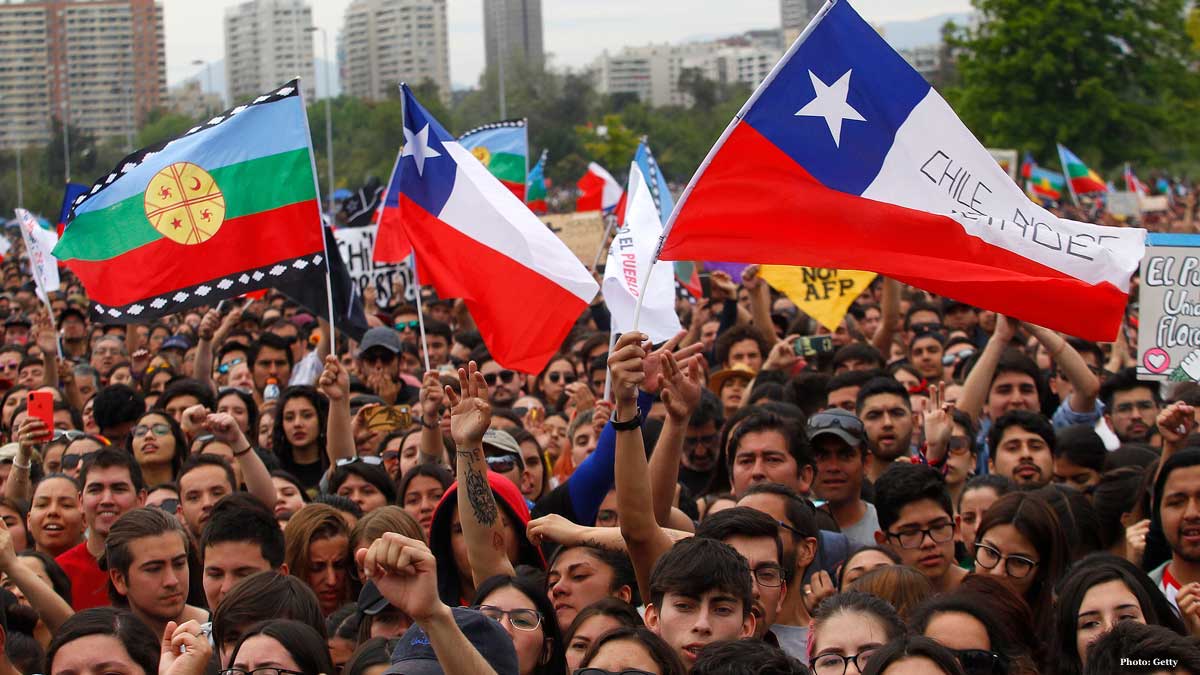 How Maduro’s crime-terror networks could use national protests to threaten the U.S.

DOWNLOAD THE ISSUE
Export this issue as a PDF.

How Maduro’s crime-terror networks could use national protests to threaten the U.S.

Riots in more than 40 major American cities last month followed similar patterns as those in Latin America last year.[1] The “breeze” of legitimate protests in urban areas after the murder of George Floyd in Minneapolis quickly escalated into a “hurricane” of violence against government institutions and private businesses – specific targets that represent national sovereignty and free markets, respectively.

There is evidence to suggest anti-American actors from Latin America fueled, and possibly deployed, local supporters to areas of unrest in the United States during the rioting. The presence of outspoken Maduro supporters in Miami, flags of the socialist Sandinista party of Nicaragua, and Chavez imagery worn by protesters in D.C. all point, at a minimum, to the presence of socialist ideologues at the forefront of the unrest.[2]  But the possible presence of foreign operatives is merely a part of a much more comprehensive national and local security threat – the consequences of which will be felt most acutely in Texas.[3]

CONVERGENCE AND THE BOLIVARIAN NETWORK

Convergence is the theory that hierarchical criminal organizations have largely been replaced by global, interlocking networks that link transnational criminal actors to international terrorist groups and their facilitators. A transformation is underway as Transnational Criminal Organizations (TCO) shift from vertical structures to horizontal ones.[4]

Meanwhile, globalization has made it possible for those criminal networks to spread and grow to the point that they possess power once reserved for nations. Admiral James G. Stavridis writes that modern criminal networks have “expanded” into “fields of diplomacy, information, military, and economic power.”[5] Such high-profile capabilities mean they do not intend to avoid detection. Instead, they look to corrupt people and co-opt public institutions so that criminals become the government. The criminal state, as it is known, remains the purest and most deadly form of convergence.[6]

Venezuela, the leader of the Bolivarian Alliance, is the epitome of a criminal state. Organized crime and conventional government in Venezuela are indistinguishable from the other. This type of criminal and political enmeshing is difficult to defeat because the criminal state can leverage public resources for their illicit operations, while retaining national sovereignty and all the benefits that come with borders and international law.

The Bolivarian Alliance, with Venezuela at the helm, then leverages facilitators, financiers, and fixers to aid in the covert movement of people, money, and material, while sharing operating areas, intelligence, and tactics. The overall strategy is to undermine rival nation-states and to challenge Westphalian state sovereignty.

The once dwindling Bolivarian Alliance has experienced a resurgence thanks to these criminal networks and has recently sown chaos and discord in Latin America for the express purpose of destabilizing democratic governments. Indeed, few Americans have probably heard of the “Bolivarian Breeze” or the “Bolivarian Hurricane”—phrases used by Diosdado Cabello, a U.S.-sanctioned drug trafficker out of Venezuela and an influential member of Maduro’s political party.[7] He used those phrases to describe the organized riots that hit, among other countries, Chile, Ecuador, and Colombia in 2019. Cabello bragged in early 2020 that this Bolivarian violence would soon strike the United States.[8]

THE RIOTS IN LATIN AMERICA

“We are organized, we are more than 100 organizations whose goal is to overturn the current political structure,” is a statement made by the former Chilean Cultural Attaché Florencia Lagos, when discussing the riots that rocked Chile in October 2019. Lagos made this statement while speaking at the International Communication Conference hosted by Maduro’s United Socialist Party (PSUV). She made quite clear the intentions of the Bolivarian Network.[9]

In mid-October 2019, Chile experienced mass riots when a 4-cent rate hike on metro travel was announced, and much like in the aftermath of George Floyd’s death, protests turned into coordinated violence as agitators attempted to and, in some cases, successfully burned government buildings and private companies.[10]

Northern neighbor Ecuador experienced something similar that same month. Activists and instigators, tied to Venezuela and the FARC, deliberately attempted to destabilize the country by using President Lenin Moreno’s plan to end state fuel subsidies as pretext for violence. The announcement about fuel in early October 2019 was soon followed by so much premeditated violence that the Moreno government had to temporarily leave the capital.[11]

Next was Colombia. Protests broke out in November 2019, which were initially billed as resistance to pension reforms.[12] Noted national security scholar Douglas Farah writes that civilian groups with ties to Colombian terrorist organizations FARC and ELN were found to be at the “forefront” of the subsequent violence.

In each instance, online provocateurs surreptitiously shifted the conversation from local grievances to the toppling of democratic governments. They exaggerated their online presence so that the shift looked organic and widespread. Instead, one analysis found that 4.8 million tweets with hashtags in favor of the protests in Chile came from 639,000 different Twitter accounts, most of which had connections to Venezuela, Nicaragua, and Cuba.[13] Plenty of analysis remains to be done on how social media activity amplified the violence in the United States.

Chile, Ecuador, and Colombia all have strong ties to the United States. All three openly oppose the Maduro regime. All three are trying to pursue free markets and democratic reforms. And like the United States, all three saw professional agitators co-opt demonstrations and resort to the looting and vandalizing of government institutions and private companies.

The Bolivarian Network’s capability to foment unrest in other countries is strengthened by political and material support from extra-regional allies, like Iran and Hezbollah, who themselves are involved to one degree or another in the corrupting of political systems. The Maduro regime intends as the leader of the Bolivarian Network for violence against the United States.

In May 2020, Americans were again reminded of the dangers of Venezuela’s crime-terror convergence when the U.S. Department of Justice indicted former member of the Venezuelan National Assembly, Adel El Zabayar, for alleged participation in a narco-terrorism conspiracy, and a cocaine-for-weapons scheme in coordination with various foreign terrorist organizations and the Maduro regime. The indictment claims that Adel El Zabayar acted as a go-between for the Maduro regime and its state-sponsored drug organization, Cártel de Los Soles, who sought to recruit terrorists from Hezbollah and Hamas for the planning and execution of attacks against the United States. In fact, according to the indictment, the aforementioned Diosdado Cabello worked with Zabayar to successfully “obtain weapons and recruit members of Hizballah and Hamas to train at clandestine training camps located in Venezuela.”[14]

SFS research six years ago revealed that for more than a decade, Venezuela’s immigration agency, SAIME, had provided government identification documents to suspected members, supporters, and militants of Hezbollah and other terrorist actors in the Middle East, making the transition in Venezuela from legitimate government function to criminal enterprise that much easier.[15]

Shared values of anti-Americanism and opposition to free markets converge with illicit activities, to create, in a way, an international Bolivarian “super cartel.” But this imposing cartel is not unstoppable. Free markets defy the privileges of its socialist elite and expose their fraudulent politics. Free markets can also starve the illicit networks on which the cartel and Bolivarian Network relies.

Texas’ businesses, particularly its small businesses, have the power to challenge this convergence masquerading as a political movement, namely because the Lone Star State commands the 10th largest economy in the world.[16] Texas has nearly unparalleled global economic influence and significant interests in a vibrant and free Latin America.

It is painful to see destruction done to the very thing that can help challenge the convergence of organized crime and terrorism.

Indeed, during the George Floyd protests in June, the state of Texas was put under a disaster declaration to protect against the threat of destruction to property, looting, and public safety.[17] The protests have been accompanied by statues being torn down, street names being changed, and brands reevaluating mascots and taglines.

A Venezuelan actress living in the United States expressed concerns over the trajectory of these recent developments. She wrote on social media that “statues came down – [Hugo] Chavez didn’t want that history displayed. And then he changed the street names. Then came the school curriculum. Then some movies couldn’t be shown, then certain TV channels, and so on and so forth,” until Venezuela was left a shell of the democratic country it once was.[18]

In other words, the longer one travels down this “road to serfdom,” the harder it is to turn around.

A first step in preempting the influence of the Bolivarian Network is to leverage free markets against the illicit networks that sustain the likes of Venezuela and Iran. That can be accomplished through public-private partnerships, collective sharing of information, and public awareness.

Information is key. Too often governments form a response based on what its organizations tell each other. Businesses of all sizes can serve as outside intelligence and could develop plans for facilitating the transfer of accurate, on-the-ground information to enforcement agencies. Businesses can also join public-private partnership groups for security, which do much of the same. Agreed upon procedures for the collection and sharing of intelligence on matters of illicit trade in goods, people, arms, and services, whether internally or through a public-private partnership, would provide a wealth of actionable insight to blunt the growth of a criminal system.

Public awareness campaigns are another way to shed light on dark activities. Whether for the consumer or related business, education on why illicit activity is bad for future investment could be a worthwhile pursuit, especially in areas where the rule of law is weak.[19]

Texas stands as a bulwark against the crime-terror convergence that continues to grow and evolve within the Bolivarian Network. With its extensive economic relationships in Latin America, the Lone Star State holds a unique position in the effort to challenge this blend of authoritarianism and unabashed criminality. Moisés Naím writes that the “proliferation of criminal states” would threaten “the integrity…of sovereign states and the fundamental structure of global order.”[20] Texas, with its free markets and political stability, can help overcome the proliferation of criminal states in its backyard.

[13] Farah and Yates, “Turmoil in the Western Hemisphere.”