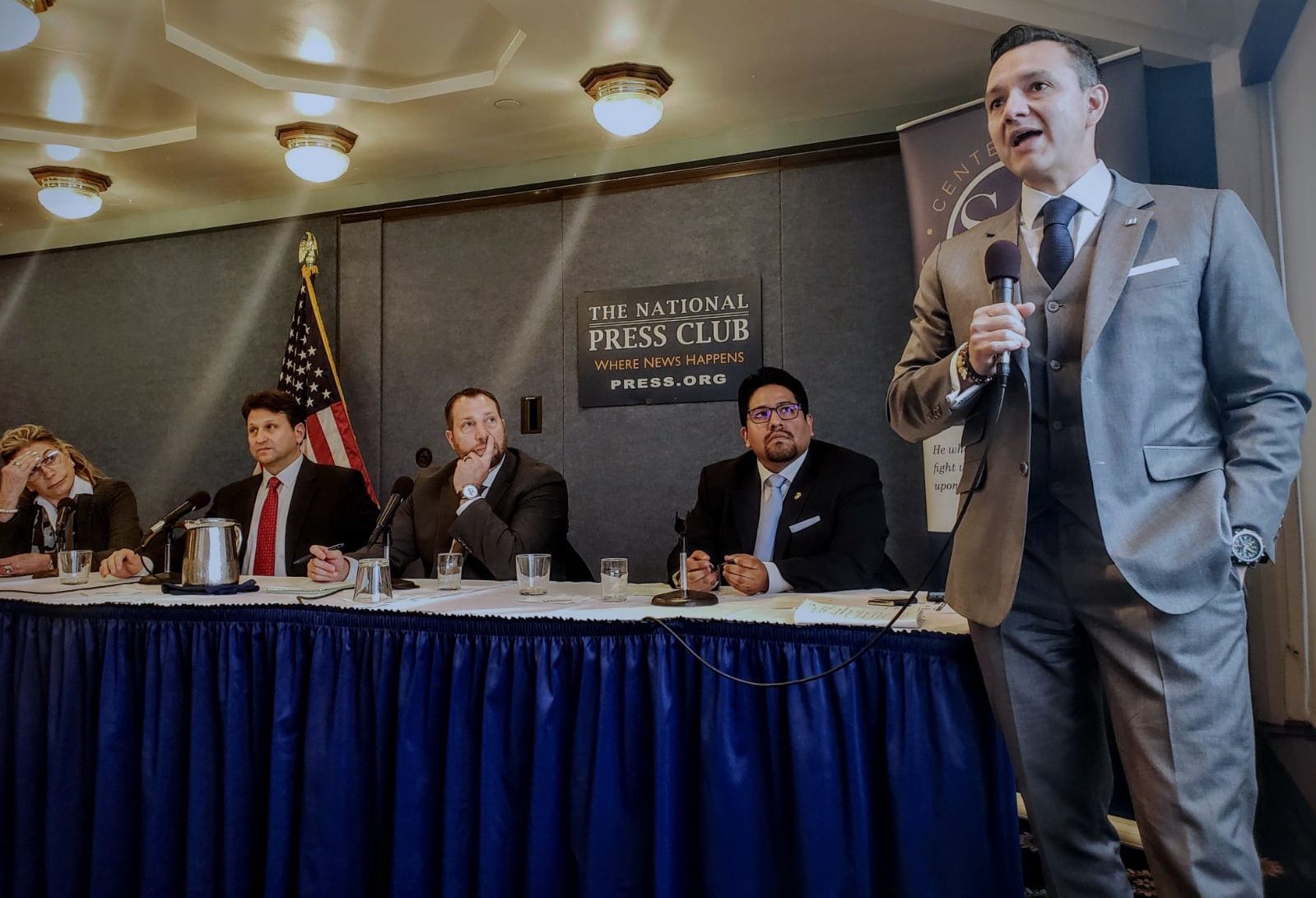 Central American Caravans: Are These a Threat to US Border Security?

Central American Caravans: Are These a Threat to US Border Security?

On Tuesday, February 12, 2019, the Center for a Secure Free Society (SFS) hosted an expert panel to discuss the recent caravan phenomenon, titled Central American Caravans: Are these a threat to US border security? The event coincided with the release of our Situation Report and Route Survey of the same topic. Guests gathered at the National Press Club for coffee and an all-star panel.

Hon. Secretary Mario Duarte took to the podium, first, to break news on a 3,000-person caravan that is amassing in Panama, which has a goal of reaching 30,000 members by the time it hits Mexico. Secretary Duarte then reiterated that the caravans are not spontaneous- they are coordinated, organized, and well-funded, with political objectives. Hon. Duarte stated the main NGOs,  Familia Latina Unidas and Pueblos Sin Fronteras, that provided funding for the caravan are based out of Chicago and used mainly Whatsapp and Facebook to communicate with and move the migrants.

Secretary Duarte went on to detail the Guatemalan response and some statistics on migrant and SIA apprehensions. He ended by calling the caravans a “weaponization of those in need,” and that the migrants are being used as “weapons of invasion and political invasion.”

Following Hon. Mario Duarte’s opening statement, Ana Julia Jatar began by asking the panel if the caravans were a political issue. Panelist David Grantham, PhD, responded that it is important to look at the size, intensity, and organization of the caravans. He mentioned, “from a Texas-perspective there is a destabilization effort on the border.” He goes on to note that the numbers from the caravan went from 10,000 to 30,000 people and the sole purpose of the increase is to disrupt/destabilize the security of the states they enter.

Jatar transitioned the panel by asking who is financing the caravans, who is behind the NGOs, and how is their purpose political? Humire answered the concept of the caravans is designed to challenge the concept of borders and the sovereign state system, to “blur the lines between borders.” He went on to state partial planning of caravans occurred in August 2018 in Bolivia, while Secretary Duarte added there was some financing from Venezuela.

Ana Julia then asked Todd Bensman, who has experience on-the-ground, at the borders, to talk about the migrants he has seen in the caravans. Bensman stated there are hundreds of SIA migrants who are routinely moving through Latin America. He remarked the issue becomes how are SIA moving across the border and how should Homeland Security deal with it rather than whether or not this travel constitutes a threat. Mr. Bensman stated at least 250 of the migrants he saw had origins from Pakistan, Iran, the Middle East, Iraq, Lebanon, and Bangladesh. He added, “if they aren’t with the migrant caravans directly, they are moving with them [either in front of them or behind them].

A later topic of discussion was centered on whether drug trafficking activities can explain the caravans. Humire remarked that cartel members initially frowned on the caravans, as it drew attention to their trafficking routes. David Grantham, PhD predicted that “conflict will either erupt between the caravans and the cartels, or they will begin working together because cartels don’t like to share their space.” Secretary Duarte added a Guatemalan example and said that cartels are trying to get the caravans to provoke violence with Guatemalan police forces in an effort to move to violent protest and/or push the police further away from the migration/narco-trafficking route.

The event was closed with a discussion on strategies for the caravans. David Grantham, PhD began with a timeline of action starting with the short term, which is marked by the U.S. enhancing security and working with allies to share information and coordinate effort. He then described the medium term, which entailed building greater cooperation with Latin American partners and taking advantage of new allies as governments change in the region. Long term practices to handle the caravan phenomena include, building economic freedom with allies to deter socialist practices. Humire continued and elaborated on David Grantham’s point to increase information sharing and cooperation. He proposed a Latin American-centric Five Eyes agreement for information sharing between the following governments: Brazil (Bolsonaro), Colombia (Duque), Chile  (Pinera), Argentina (Macri), Guatemala (Morales).

While the event shed light on the serious security concerns posed by the caravans it is important to remember that actors are “weaponizing those in need” and using the caravans as a means to their own ends. Joseph Humire stated that a majority of the migrants are seeking a better life and a small percentage are violent, but the caravans as a whole, are a tool of asymmetric war. Asymmetric war eliminates military force as a center of gravity and creates a war of legitimacy and popular opinion. Asymmetric warriors need populations to manipulate popular opinion, which is the reason why the caravans are targeted. The enemy’s strategy is to delegitimize the U.S. in Latin America.

Watch a brief overview of the topics discussed during the event, below. For more information or to watch the event, follow links to our YouTube page for full event video coverage, our SFS Situation Report on the caravans, or a detailed route survey following the caravan’s movements.

New migrant caravan forming could be largest caravan yet

This Situation Report covers the recent crisis driven by mass migration from Central America through Mexico to the United States southwest border.