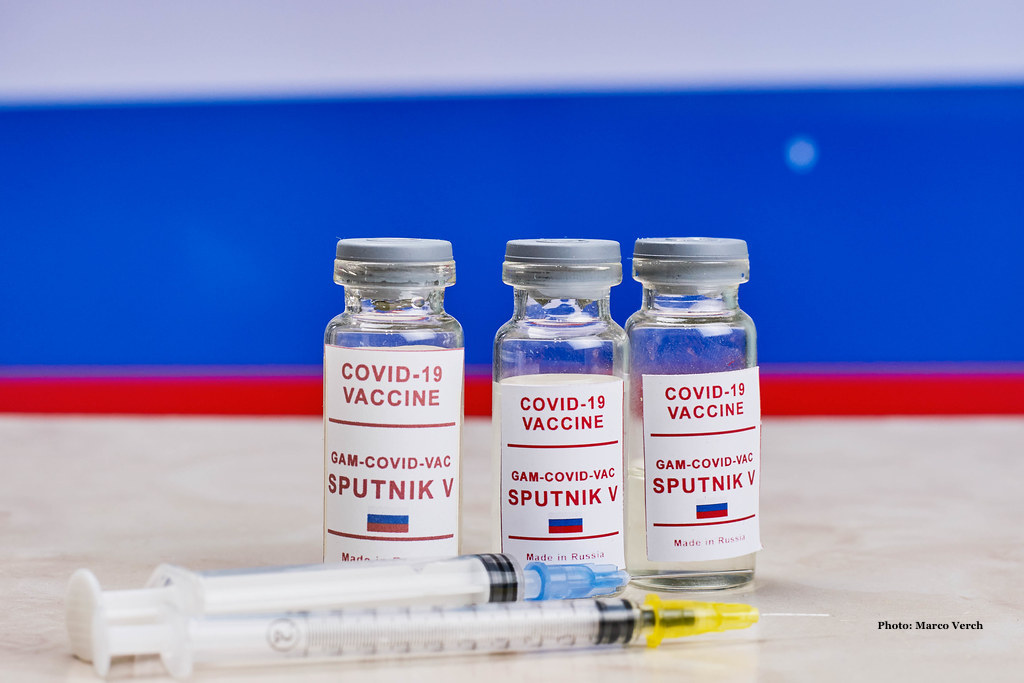 SAVE ARTICLE
Export this report as a PDF.

In late 2019, Russia, Iran, and China carried out, for the first time-ever, a joint naval exercise in the Gulf of Oman as tensions heated up between Tehran and Washington. This month, the three are set to hold another joint naval drill in the northern Indian Ocean to enhance “search and rescue” operations according to the Russian ambassador to Tehran.

In Latin America, the VRIC complements its military coordination in the Near East with increased joint-medical diplomacy in Latin America and the Caribbean as Chinese and Russian coronavirus vaccines are rapidly shipped throughout the region and an Iranian-Cuban joint venture in vaccine production begins.

While the U.S. and Canada prioritize domestic vaccination, Russia and China are focused on the developing world. Argentina and Nicaragua have already received the first doses of the Russian vaccine while Peru, Brazil, and Chile have begun purchasing and distributing the Chinese CoronaVac and SinoPharm vaccines. Meanwhile, Venezuela’s Maduro regime receives its first 100,000 doses of Sputnik V, as China inks a deal with the Luis Arce government of Bolivia for 500,000 doses of the Sinopharm vaccine.

In 2021, Venezuela and Bolivia continue to consolidate their efforts on cracking down on internal opposition. In Caracas, the Maduro regime has threatened to jail opposition leaders, including interim President Juan Guaido. Meanwhile, in La Paz, the Arce regime examines international options to further persecute former ministers of the previous Añez government.

In Venezuela, this comes as the Maduro regime looks to escalate tensions with its neighbors, including seizing Guyanese fishing vessels amidst the ICJ verdict of the maritime border dispute between the two countries ruling in favor of Guyana. These outward aggressions prompt Colombia to stand up an elite military unit to keep its borders safe from threats stemming from Venezuela. One of those being the heightened nefarious activities of the binational terrorist group, the National Liberation Army (ELN), who, according to the Cuban ambassador in Bogota, could carry out another attack in Colombia.

The recently revealed encrypted files of ELN’s Western Front Commander “Uriel” uncovered terabytes of information showing the terrorist group’s regional reach. This includes potential payouts to favorable presidential candidates in Ecuador, at a time when many countries in Latin America are facing their own elections that can potentially shift the political landscape in the region. In 2021, presidential elections are slated in Chile, Ecuador, Haiti, Nicaragua, and Peru; and legislative elections in Argentina, El Salvador, and Mexico.

The Chavista-controlled National Assembly is closing in on the weakened opposition. Guaidó’s waning international support has emboldened the Maduro regime to prosecute him and accuse other opposition members of alleged bomb plots. This could be paving the way for a coming crackdown, as it certainly is a means to move the Maduro propaganda machine.

While the Maduro regime consolidates internally, it’s also projecting its power against its neighbors, including intercepting Guyanese fishing vessels. In light of these aggressions towards its neighbors, Colombian President Ivan Duque announced the creation of an elite commando unit to combat threats stemming from Venezuela. Some of these threats come from longstanding insurgent groups in Colombia. A trove of encrypted files from captured ELN commander “Uriel,” revealed the group’s heightened reach throughout the region. Especially in Ecuador where the ELN discussed payouts to presidential candidate Andres Arauz, who recently advanced to a runoff in April in Ecuador’s presidential elections. Uncovering and analyzing these encrypted files furthers speculation of the triangulation of Cuba, Venezuela, and the ELN to destabilize the region with external support from Russia and Iran.

The revelation of coordinated regional destabilization comes at a time when migration policies are shifting throughout the Americas. The Biden administration recently reversed his predecessor’s end to the “catch and release” policy, reinstating it as well as revoking asylum agreements with the Northern Triangle as border crossings are reaching what former DHS secretary Jeh Johnson calls “crisis” levels. Meanwhile, President Duque grants Venezuelans temporary legal status to millions of refugees in Colombia, while Chile expels its Venezuelan migrants.

Elsewhere, the Grupo Puebla, a renewed populist-socialist alliance of leftist political leaders in Latin America, held its fifth meeting virtually on January 29. Eleven former presidents and at least eight countries were represented, including Argentina, who with Alberto Fernandez at its helm, is increasing ties to the VRIC network. 2021 is a critical year in Latin America and the Caribbean as the Grupo Puebla may strengthen through the results of presidential elections in Chile, Ecuador, Haiti, Nicaragua, and Peru; and legislative elections in Argentina, El Salvador, and Mexico.

After last month’s revelation of Moscow’s spy network in Bogota, culminating in the expulsion of diplomats from both sides, and this month’s diplomatic battle with EU member states, which saw Russia bar officials from Germany, Sweden, and Poland for their supposed involvement in protests supporting Russian dissident Alexei Navalny, the country seems to be laying low in Latin America.

Russia’s visibility in the region comes through its coronavirus aid, which seems to be overtaking China in its medical diplomacy mission. Its vaccine, Sputnik V is racing across Latin America, in shipments and memos of intent, to almost half the countries in the region.

Panama is the latest to express interest in, or receive, the Russian vaccine. It joins Paraguay, whose Health Ministry signed a letter of intent requesting three million vaccines and Ecuador, which requested a million doses in its agreement with Russia. Bolivarian network allies, Nicaragua, Bolivia, and Mexico have also all approved the Sputnik V vaccine for emergency use. While Venezuela just received the first 100,000 doses of the Russian coronavirus vaccine and a medical delegation from Geropharm, one of Russia’s top drugmakers. Even Colombia has been in talks with Russia’s Gamaleya Institute regarding vaccines. Outside Latin America, Iran has chosen Sputnik V to begin mass vaccinations despite a joint venture with Cuba to develop a vaccine and Turkey is in talks with the Russian Direct Investment Fund to transfer technology and begin producing the Sputnik vaccine in-country.

Last month’s monitor brought news of potential Russia-Argentina space exploration, however, in Chile, space collaboration with Russia was halted. The deputy director-general at the Russian state space corporation, Roscosmos, reasoned that Chile “lacks the authority with respective government powers on fulfilling the provisions of an intergovernmental agreement on space.” But he also remarked that the pending election in Chile could push back a prospective timeline on the proposed creation of a space station in the country.

Last year, Iran came out of the shadows and was an increasingly visible ally to Venezuela. This year, it looks to leverage that into greater disinformation efforts in the region, manipulating the narrative around new developments in the Nisman murder case and amplifying the image of Quds Force General Qassem Soleimani around the first anniversary of his death.

Six years after Nisman’s murder, his case remains largely unsolved. Instead of working to uncover the culprit, Argentine courts are investigating the attorney’s assets and family members as a way to further defame Nisman’s efforts to bring those responsible for the AMIA attack to justice. The case has been the subject of Iranian propaganda since the fateful day Nisman was found dead in 2015, with state-media parroting the message that he killed himself. Now, a new documentary by opposition Congressman Waldo Wolff will debut in 2021, showing a different perspective on Nisman’s death that will push back against false narratives promoted by Iran and others.

Meanwhile, Iran’s propaganda machine is busy promoting General Soleimani as a “martyr” for revolutionary networks worldwide. HispanTV increasingly pumps out Spanish media across Latin America lauding Soleimani as a “hero” and a recently published book, “My Uncle Soleimani,” is distributed in Venezuela, Ecuador, and Colombia. Media is complemented by high-level political messaging from allies, such as Evo Morales in Bolivia and the Maduro regime in Venezuela, whose political party PSUV held a week-long tribute to Soleimani in La Guaira, near the Colombian border, in what it calls “February’s month of resistance.” And as Iran drives a messaging firestorm in Latin America, they are on the move elsewhere in the hemisphere. In addition to migrants from Central America’s Northern Triangle, Yuma Border Patrol recently detained 11 Iranians crossing into the U.S. on the night of February 1st near San Luis, Arizona. Iran is considered a “special interest” country by Homeland Security for its high density of ties to various terrorist organizations.

Last month highlighted China’s foray into mass surveillance and espionage in the Western Hemisphere, this month China is back to working its diplomatic angles, including a renewed push for their COVID-19 vaccine, as it adopts a “one-team” mindset with its vaccine in Latin America vis-a-vis Russia’s Sputnik V.

Peru, facing a brutal second wave, received a shipment of 300,000 doses of the Chinese Sinopharm vaccine on February 7th. Days later, the country began its vaccination campaign with President Franciso Sagasti getting one of the first shots along with the impeached ex-President Martín Vizcarra. This prompted a public relations crisis in the country as many perceived the Peruvian government providing preferential “VIP vaccinations,” resulting in the resignation of the health and foreign ministers. This comes amidst a statement that China is willing to cooperate in mining, industry, and oil fields, infrastructure construction, and new technologies like 5G and artificial intelligence, affirmed by the Chargé d’Affaires at China’s embassy in Lima.

Moreover, Beijing makes diplomatic moves throughout the region. Shortly after the Biden administration began, China pressured Guyana to correct their “mistake” in agreeing to open an embassy in Taiwan. Guyana bowed to the cloaked demand and rolled back their agreement with Taiwan while emphasizing support for the “One China” policy. Elsewhere, Cuba and Mexico are on the receiving end of China’s preferential diplomatic overtures. Last month, Cuba and China signed an agreement on the mutual exemption of visas for holders of diplomatic, services, officials and public affairs passports and late last year, China and Mexico shared a year-end call to discuss improving their bilateral relationship.

While China’s fishing ventures were supposedly being challenged by Ecuador, Chile, Peru, and Colombia at the COMM9 meeting from January 29th -February 3rd, no concrete measures have been reported. China is actually expanding its maritime territory into Argentina. Hundreds of Chinese-flagged squid boats are approaching Argentina’s EEZ and the Fernández government is rejecting U.S. help, instead choosing to negotiate with China. China’s illegal fishing is also turning into smuggling, as impunity encourages the Mexico-China seahorse trade.