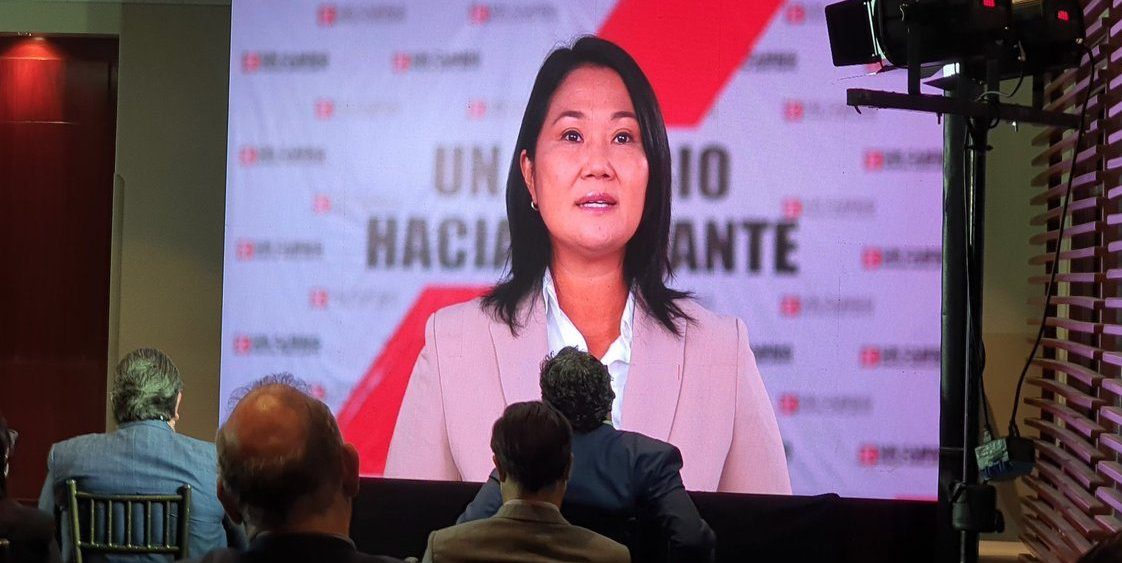 VRIC MONITOR | All eyes on Peru and Colombia

Whether it’s the flared tensions between Israel and Hamas, or the current crisis and social unrest in Colombia, it is increasingly clear that democracies worldwide are under assault by brutal disinformation efforts amplified by certain regional governments in Latin America and their non-state networks. The Maduro regime and its allies in Havana, La Paz, and Buenos Aires, all made recent statements condemning both the Israeli government and the Duque government of Colombia, with no mention much less condemnation of the violence sparked by terrorist groups, such as Hamas, the ELN, and the dissidents of the FARC.

This instability comes as Latin America faces a political crossroads, where Ecuador inaugurates a new market-friendly, pro-democracy president, yet El Salvador, Mexico, Bolivia, and others, undergo a democratic backslide by new governments with authoritarian tendencies. Colombia and Chile are in different stages of a social and political crisis, while the largest democracy in the region, Brazil, is facing internal and external pressures that could erupt into social unrest at any moment. Setting the stage for perhaps the most important election, in a year of elections, in Latin America: the presidential run-off on June 6 in Peru.

Two Peruvian presidential candidates with vastly different profiles include a relatively obscure socialist schoolteacher, Pedro Castillo, with ties to the Shining Path, and a well-known, sometimes controversial, perennial presidential contender in Keiko Fujimori. But this is not an ordinary election. The global context of the pandemic and democratic forces facing authoritarian actors overshadows the differences and even concerns that the pro-Liberty movement in Latin America might otherwise have about Ms. Fujimori. This was highlighted in a recent international forum, where longtime Peruvian political adversaries, Mario Vargas Llosa and Keiko Fujimori buried their rivalry in favor of a mutual commitment to democracy, free enterprise, and the rule of law.

The Madrid-based Fundación Internacional para la Libertad (FIL), presided by Nobel Laureate Mario Vargas Llosa, hosted the forum in Quito on the eve of the inauguration of Ecuadorian President Guillermo Lasso. The FIL manifesto, published on April 23, and signed by more than 150 leaders from 23 countries in Ibero-America, strongly states that the “pandemic should not be a pretext for authoritarianism.” While not explicit in the manifesto, the pro-democracy, pro-freedom Latin American leaders are slowly uniting against the VRIC and its regional allies who are capitalizing on the negative economic effects of the pandemic.

An Andean nation with the world’s worst fallout from the novel coronavirus, coupled with an economic crisis and ongoing political instability, will soon set the tone for the region. A high-stakes election that can either take Peru back to its dark ages of narco-terrorism or worse, or reignite a conservative wave that will start the long, hard road of economic recovery in Latin America. In either case, Venezuela, Russia, Iran, and China, are waiting for the results of Peru’s June 6 election to make its next move.

Colombia is undergoing an asymmetric assault. Be it the ongoing border conflict in the Apure state of Venezuela, or the intense national protests that led to approximately 700 arrests, at least 40 deaths, almost two thousand injuries, and serious economic damage–the Maduro regime benefits from the crisis in Colombia. The recent unconfirmed death of a top dissident leader of the Revolutionary Armed Forces of Colombia (FARC-D) alias “Jesus Santrich” further complicates the rising tensions between the two countries.

In early April, prior to the current Colombia protests, the Maduro regime began planting a false narrative of the Duque government as a narco-state under paramilitary rule. During the Colombia protests, these false narratives were amplified through high levels of foreign disinformation allowing the Maduro regime to project its own nature and shortcomings onto its neighbor.

While the Maduro regime capitalizes on the Colombia crisis, it’s buying time with its political opposition. There is a renewed push by part of the Venezuelan opposition for another round of negotiations, a move that has previously proved to only “lull” the international community and political opposition into a false sense of confidence. This time within the context of COVID-19 and an attempt to secure COVAX vaccines for Venezuela.

Elsewhere, the Maduro regime Foreign Minister Jorge Arreaza traveled to Bolivia on April 22, supposedly for an Earth Day conference, where alongside Evo Morales they “promoted ALBA and the recent return of the people’s democracy to Bolivia.” And while former President Jeanine Añez remains incarcerated without due process, the new Arce government is gradually escalating its claims that her government came to power in Bolivia through a coup d’etat. A false claim that will likely be carried to the international community by Bolivia’s new ambassador to the Organization of American States (OAS), Hector Arce Zaconeta, a former justice minister and close ally of Evo Morales.

Bolivia will have to contend with the European Parliament who issued a resolution on April 29, demanding President Añez be released from prison. This comes after Pablo Iglesias, founder of the Podemos Party in Spain and close ally of the MAS regime in Bolivia, lost an electoral bid in Madrid’s local elections. Despite false rumors that Pablo Iglesias went to Peru to advise Peruvian presidential candidate Pedro Castillo, there remains a concern that Iglesias will retire back to his role as a regional facilitator between socialist-populist movements in Ibero-America.

Russia’s vaccine diplomacy is in full swing in South America, especially after Brazil’s largest pharmaceutical company, União Química, has completed production of the first 100,000 doses of Sputnik V, with ingredients and technology provided by Moscow’s Gamelaya Institute. The Russian coronavirus vaccine will be exported to neighboring countries in South America soon since Brazil has not yet approved Sputnik V for domestic use. Russia’s vaccine diplomacy in South America is facilitated by the Maduro regime’s former ambassador to the U.S., Maximilien Sánchez Arveláiz.

Like China, Russia’s vaccine diplomacy is linked to its strategic objectives in the region. Among those are its nuclear aims, discussed in March with the opening of a new Cuba-Russia Binational Cooperation Council and construction of the first of two nuclear research centers in Bolivia. In May, Russia confirmed its plans to build two nuclear plants in Argentina, highlighting the supposed blueprint’s similarity with the Chinese nuclear power plant in the Neuquén province. These plans include a partnership by Russian oil company Gazprom and Argentina’s Pampa Energía to operate in Vaca Muerta, a province of Neuquén. With both Russia and China’s operations in the Neuquén province, the Sino-Kremlin triangulation on nuclear cooperation in Argentina is afoot.

On April 19, a Russian Air Force IL-96 deviated its flight path into Colombian airspace. The flight in question crossed over from Venezuela, where, days later on May 4, Russian investors and journalists joined Venezuela’s military technicians for Conviasa’s inaugural direct flight from Caracas to Moscow. The same day, the Kremlin sent famed American actor Steven Seagal to visit Nicolás Maduro in Caracas, followed by a visit weeks later to Moscow on May 18 by Venezuelan National Assembly President Jorge Rodriguez who spoke at a plenary session in the State Duma, the lower house of Russia’s Federal Assembly.

Click here to read media reports on Russia in LAC

The current conflict between Israel and Hamas has activated a global disinformation campaign by Iran. In Latin America, these false narratives are amplified by Iran’s allies such as the Venezuelan and Cuban regimes, but also by certain regional governments in a telling nod to their undercutting alliances. Argentine President Alberto Fernández condemned Israel’s “disproportionate use of force” while the Arce government of Bolivia accompanied the criticism of Israel. Neither government mentioned, much less condemned, the more than 4,000 rocket attacks or violent rhetoric by Hamas against Israel.

Meanwhile, Iran’s surrogates have been dispatched to South America to further spread anti-Israel and pro-Palestinian sentiments. Suhail Assad, an Argentine Shi’a cleric known for having close ties to Iran’s Islamic centers in Latin America, spoke in Brazil days prior to the rockets raining down on Israel, with a pro-Palestinian virtual lecture on the occasion of International Day of Al-Quds. He was joined by Brazilian activists, journalists, and politicians from the Workers Party (PT), which is the political party of the former President Luiz Inácio “Lula” da Silva, who was convicted of corruption but recently had his case annulled by Brazil’s Supreme Court.

While the narrative battle ensues in cyberspace, the air and sea bridge from Iran to Venezuela is active with the recent arrival of a flight on May 23 from sanctioned IRGC linked Fars Air Qeshm cargo plane (EP-FAB) that flew from Tehran to Nouakchott, Mauritania, and then to Caracas, arriving at the presidential hanger (Rampa 4) of the Simon Bolivar International Airport. The flight is in advance of an Iranian naval warship scheduled to make its first transatlantic voyage to Venezuela in June. Tehran’s ties to Venezuela continue to strengthen as the Central Bank of Iran has authorized commercial banks to pay for imports with Bitcoin, a move that mirrors the Maduro regime’s efforts to use cryptocurrency as a sanctions-busting tool and alternative payment system in international trade.

Click here to read media reports on Iran in LAC

China’s commercial footprint is taking a military turn in Latin America. On May 8, a delegation from China’s National Aero-Technology Import-Export Corporation (CATIC) was in Argentina to discuss defense cooperation and the potential sale of supersonic aircraft. This follows Russia’s  proposal to provide fighter aircraft and training jets to the Argentine Air Force in February 2021.

As Argentina falls deeper into the VRIC orbit, China hones in on its neighbors. The PRC’s ambassador in Montevideo expressed his country’s willingness to open trade with Mercosur, while earlier rumors of Paraguay’s potential to disrupt historic relations with Taiwan in favor of China were quelled after India stepped in to help acquire vaccines for the Abdo government. And while President Bolsonaro continues to be outspoken against the Asian giant, many lower level Brazilian officials have expressed support and the desire for enhanced cooperation with China.

In Central America, El Salvador continues to move under President Bukele’s authoritarian tendencies while it becomes increasingly evident that China and Russia have outpaced the United States as his preferred partner. A series of MOUs signed in 2019, totaling more than $500 million in development projects, including a new sports stadium and water treatment facilities, have now been ratified by El Salvador’s Congress. Russia seems to have also set its sights on enhancing relations with the Bukele government, prompting El Salvador to become the next VRIC-friendly nation in Latin America.