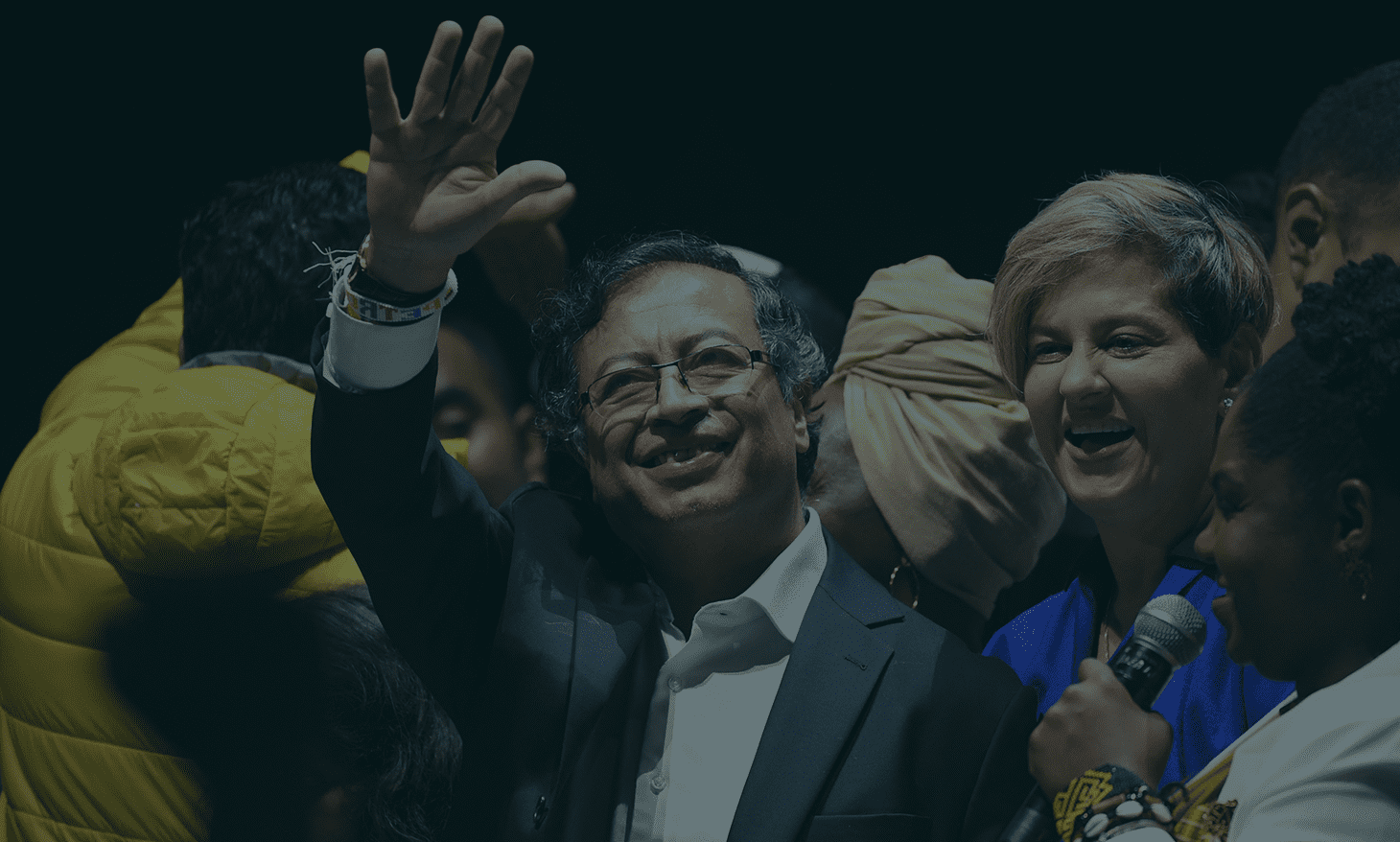 VRIC MONITOR No. 27 | Petro and the Bolivarian Hurricane

Gustavo Petro’s victory in Colombia’s presidential election on June 19 consolidates the gains the Latin American left has made in recent years. Despite distancing themselves from Petro during his campaign, congratulations poured in from some of the most autocratic corners of the region. Starting with Venezuela’s Nicolas Maduro and Diosdado Cabello who stated, only minutes after Petro won, that “united, we’ll be victorious.” President-elect Petro has since declared his intention of reopening Colombia’s border with Venezuela and renewing relations with the Maduro regime.

President Petro may not outright join the regional club of authoritarian states, known as the Bolivarian Alliance or “ALBA” at the onset but he certainly shares their worldview. Under the banner of “peace” Petro is already setting the stage to provide incentives to criminal and terrorist groups in Colombia, such as the ELN, to sign a peace deal that will likely result in neither peace nor justice. And can result in further blending the formal agricultural sector with the illicit economy of cocaine.

All eyes will be on Bogota on August 7 when Gustavo Petro is inaugurated as Colombia’s next president. Meanwhile, across the border, Venezuela will be prepping to host a competition in the International Army Games, Russia’s largest multinational military exercise. Even though Russia is still at war with Ukraine, part of its military is prepping to bring, for the first time, some of these military games to the Western Hemisphere.

In mid-August, Venezuela will host the “Sniper Frontier” competition with the participation of Russia, Iran, and China’s military, as well as at least 10 other nations. In a strategic move that seeks to preposition forward-deployed military assets in Latin America and the Caribbean, the VRIC nations are getting ready to make a loud statement that the region is ready to embrace the multipolar force. This was recently highlighted in Vladimir Putin’s speech in St. Petersburg on June 17 at the International Economic Forum:

“A year and half ago, speaking at the Davos forum, I once again emphasized that the era of the unipolar world order is over…. despite all of the attempts to save it, to preserve it by any means possible. When they won the Cold War, the US declared themselves God’s own representatives on earth, people who have no responsibilities — only interests. They seemingly have not noticed that new powerful centers have arisen and are getting louder and louder.

This was echoed on June 22, when President Xi Jinping of the People’s Republic of China followed suit at the 14th BRICS (Brazil, Russia, India, China) Business Forum held in Beijing, appealing to its members to unite against an increasingly unipolar world. Days later, on June 27, Argentina and Iran submitted applications to join the BRICS group, which is a sign that the VRIC is expanding and the “Bolivarian Hurricane” is coming.

Nicolás Maduro was not invited to the 9th Summit of the Americas on June 6-10 held in the Los Angeles Convention Center, however, his regional allies ensured a message was sent. From Argentine President Alberto Fernández attending on the condition that Juan Guaido was disinvited to Mexican President Andrés Manuel López Obrador snuffing the summit all together. It appears a concerted effort was made by certain Latin American leaders to delegitimize the OAS-led summit and prop up the China-supported CELAC. Evidenced by Alberto Fernandez inviting President Joe Biden to the next CELAC meeting and Maduro congratulating Fernandez from Tehran.

Across the Atlantic, Maduro was on a two-week, six-country Eurasia and Middle East tour starting with his trip to Istanbul on June 7. Boosting economic ties in oil and gas, gold, mining, and tourism sectors with Turkey, Maduro extended this cooperation to Algeria, Kuwait, Qatar, and Azerbaijan, culminating with a 20-year strategic deal signed with the Islamic Republic of Iran. The strategic deal between Iran and Venezuela is meant to mirror similar strategic agreements that the Islamic Republic signed with China and Russia in recent years.

After Maduro returned to Venezuela on June 18, the Conviasa government plane YV3533 returned to Iran where the presidential plane YV2984 flew to St. Petersburg, Russia. The movement of several Conviasa planes, some leased from the Iranian airline Mahan Air, prompted suspicion when a Boeing 747 cargo plane from the new Venezuelan airline Emtrasur Cargo touched down in Ezeiza International Airport in Buenos Aires. The cargo plane was subsequently grounded on June 8, while other Conviasa/Mahan Air planes continued flying between Mexico, Nicaragua, Cuba, Chile, Bolivia, and Peru.

In Peru, a new law was passed in mid-June allowing for armed, auto-defense groups to be established prompting concern for future “colectivos” similar to those in Venezuela and Cuba. While in Bolivia, in mid-May, the former Venezuelan minister of prisons and current legislator, Iris Varela, took a trip to the coca-growing heartland, Chapare, for meetings with Evo Morales and then was denied entry into Argentina on May 12 because she is on a prohibited ITAR list adopted in 2019.

In Ecuador, although the state of emergency was lifted as President Guillermo Lasso entered into talks with the Confederation of Indigenous Nationalities (CONAIE), after more than two weeks of violent protests in 11 provinces throughout the country– he could now face an impeachment proceeding sparked by his political opponents. The protests were accompanied by more than 20 roadblocks that caused food and fuel shortages in Ecuador prompting the political party linked to former President Rafael Correa to motion to remove Lasso from the presidency.

Alarm bells rang throughout the region on June 8 after Uruguay denied its air space to a Venezuelan cargo plane that was discovered to have members of the Qods Force, the elite unit of Iran’s revolutionary guards, on board. Gholamreza Ghasemi, a known weapons trafficker for the IRGC and manager of Qeshm Fars Air, was piloting the Boeing 747-300M that returned to Buenos Aires along with four other Iranian nationals and 14 Venezuelans. The plane, which was reportedly transporting “auto-parts” for Volkswagen, the German car maker, was grounded at the Ezeiza International Airport while the flight crew remained at Hotel Plaza Canning, outside Buenos Aires. Days later, on June 15, their documents, personnel effects, and electronics were seized by Argentine authorities who discovered images of tanks, missiles, and other pro-IRGC paraphernalia on one of the mobile devices.

The Argentine government tried to minimize the incident, repeating false claims such as that Ghasemi was an homonym and not an IRGC member. But was quickly debunked by the FBI and the Israeli Embassy in Buenos Aires who confirmed Ghasemi’s true identity. Ghasemi also made at least thirteen trips from Iran to Venezuela in the last year and a half, even before the Maduro regime’s agreement with Mahan Air began. The identity of the other Iranians on the plane, however, is still a mystery with at least one of them, Mohammad Khosraviragh, an Iraqi national, using what appears to be an alias or false identity as an Iranian.

Elsewhere in Argentina, another Iranian national was picked up by authorities in the Entre Rios province along the border with Uruguay. This individual possessed a fraudulent Venezuelan passport and had a previous history presenting false documents to Argentine migration. This comes as a well-known Argentine journalist, George Chaya, is under police protection after facing possible death threats.

Meanwhile, on June 8, Iran sent the second aframax oil tanker “Yoraco” to Venezuela built by the long-sanctioned, IRGC-affiliated SADRA shipyard. Nicolás Maduro and Ebrahim Raisi provided remarks via a video link during the handover ceremony at the Iranian port-city of Bushehr. Venezuela reportedly has two additional tankers on order from Iran.

One week later, on June 15, a Conviasa plane YV3535 arrived at the Santiago Mariño Caribbean International Airport on Margarita Island, Venezuela with a reported 70 Iranian “tour operators” and “influencers” days after Maduro signed a strategic deal with Iran, and Argentine authorities confirmed that Venezuela’s Emtrasur Cargo YV3531 is still owned by Mahan Air.

In the midst of the Ukraine War, Daniel Ortega of Nicaragua renewed Decree 10-2022 authorizing Russian troops, planes, and ships to patrol the Central American country’s borders and conduct joint military training exercises. Nicaragua’s National Assembly approved the measure that, aside from Russia, allows seven Latin American countries and the United States to participate in an “exchange of experiences, training exercises, and humanitarian operations.”

Elsewhere in Central America, Conti, the Russia-aligned cyber group, has been wreaking havoc in Costa Rica. In May, Costa Rica declared a national emergency after repeated cyber attacks crippled infrastructure and systems from public health to social security. The Russian hacking group also called for civic unrest, which may come to Costa Rica in light of soaring gas prices, a pandemic-weary tourism industry, and the announcement of salary increases for the cabinet. Further south, Conti also claims to have hacked Peru’s National Directorate of Intelligence.

Russia’s intelligence operations extend to espionage when it was discovered that an alleged agent of Russia’s GRU military intelligence used a false identity as a Brazilian national to try and obtain an internship at the International Criminal Court (ICC). It appears that the Russian agent, Sergey Vladimirovich Cherkasov, had been cultivating his cover as a Brazilian national for years and may not have been working alone.

In February 2020, a Mexican scientist was arrested for spying on a FBI informant in Miami for Russia. This past week the spy, Hector Cabrera Fuentes, pled guilty in a federal court and was sentenced to more than four years in prison.

The BRI is also in full swing in Argentina despite pushback from local Mapuche communities. Progress on two dams being built on the 236-mile Santa Cruz River in Patagonia have continued amidst protests, lawsuits and court orders to pause construction. China also received good news in Peru, where indigenious communities lifted a protest at Las Bambas copper mines that caused a halt in operations.

But the BRI isn’t the only in-roads China has in the region. Chinese President Xi Jinping has invited Argentina to participate in three BRICS events, including a get-together of political parties, social organizations and think tanks; a summit of foreign ministers from Brazil, Russia, India, China, and South Africa, and the Argentine Minister as a guest on May 20; and a summit of the five-plus one leaders that is scheduled for June 24.

In Peru, China is running into problems with the indigenious communities in the Apurímac Region in the south of the country. On April 20, Chinese mining firm MMG announced it will halt activities at Las Bambas copper mine due to safety concerns stemming from a group of 130 people who had been camping on the property since April 14.

And as Russia attempts to delegitimize the international financial system, China has signed an agreement with a Switzerland-based bank to establish a reserve of yuan currency together with Indonesia, Malaysia, Hong Kong, Singapore and Chile to counter the US dollar.