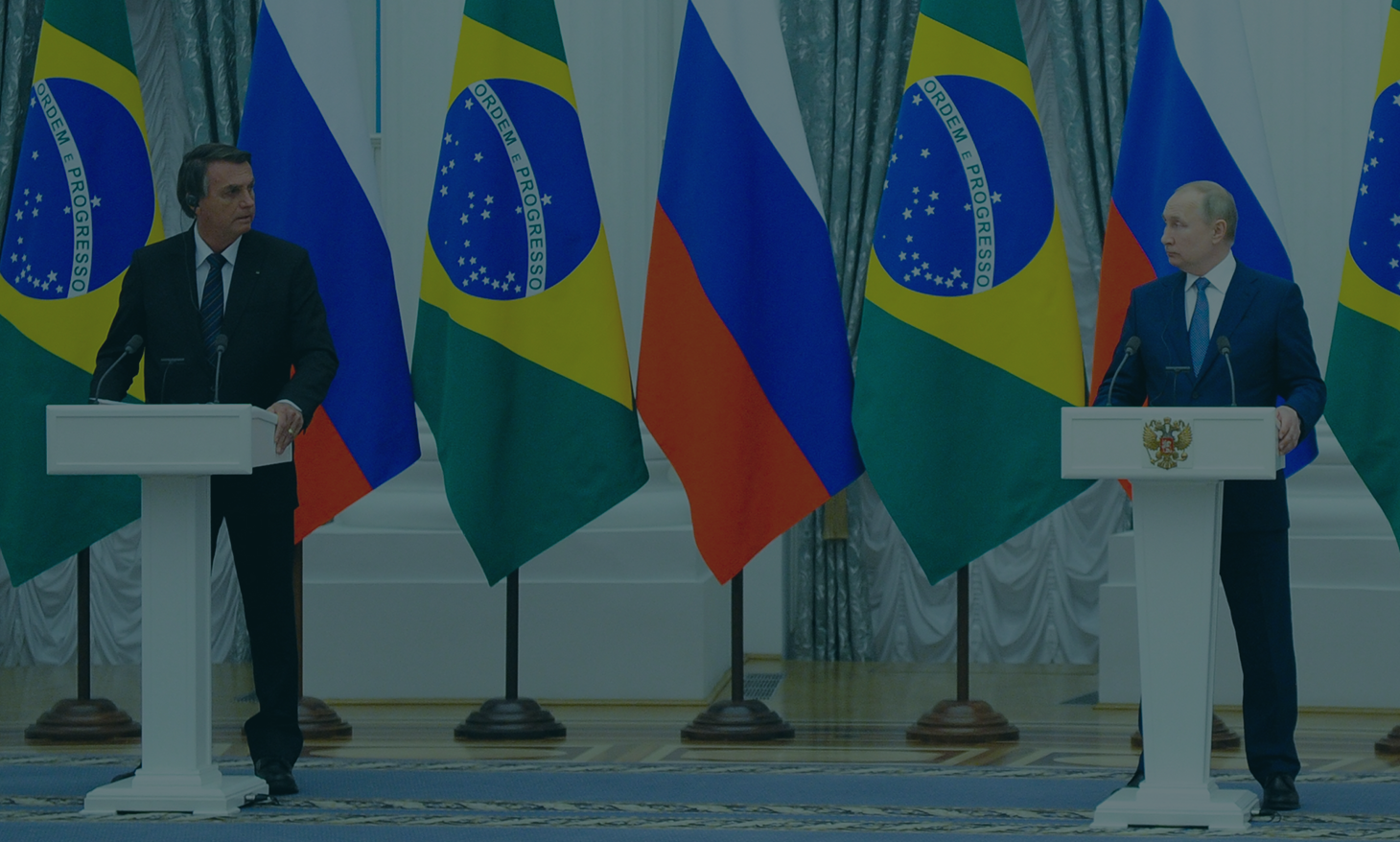 As Russian missiles continue to rain down on Ukraine, the consequences of war are also being felt thousands of miles away. Several countries in Latin America depend on wheat and fertilizer exports from Russia and Ukraine, where the ongoing war has caused a disruption in the supply chain of these agricultural products prompting shortages and the average food basket price to spike regionwide.

Brazil, for instance, is one of the largest agricultural producers in the world, particularly in soybeans. But the soybean industry in Brazil depends on fertilizers that the country imports. 23 percent of Brazil’s fertilizers come from Russia (and another 14 percent come from China) placing the South American giant at the mercy of the VRIC. Since the Ukraine war began, both Iran and Russia have increasingly courted Brazil, making promises to increase exports of fertilizer and related products, claiming they will save the country from famine. Moscow and Tehran even started the hashtag #AmizadeBrasilirã to use disinformation to continue to sway Brazil into its geopolitical orbit.

The Ukraine war is also exacerbating the crisis at the U.S. southern border. According to recent CBP data, encounters of Ukrainians and Russians at the border have increased 753% between FY2020 and 2021 as Russian military-aged males are flocking to Tijuana en route to the United States.

“Today, more than ever, America’s fate is inextricably linked to events beyond our shores.” Nowhere is this more evident than right here in the Western Hemisphere. This region—our shared neighborhood—is under assault from a host of cross-cutting, transboundary challenges that directly threaten our own homeland. Countering these threats requires greater U.S. attention, commitment, and investments to reverse the current disturbing trends.

With the VRIC alliance strengthening, U.S. strategic partner Colombia is facing an unprecedented challenge to its democracy. Having survived a decades-long guerilla insurgency and various phases of narco-terrorism, the second oldest democracy in the region, Colombia, is now facing perhaps its most pressing challenge: foreign intrusion by the VRIC, namely Russia. U.S. Under Secretary of State for Political Affairs, Victoria Nuland, traveled to Bogota in February to emphasize that “foreign actors” are attempting to interfere with Colombia’s upcoming elections. Since then, at least two Russian nationals have been arrested in Bogota in a massive money-laundering scheme that could have strategic implications in Colombia and Latin America.

The Maduro regime has consolidated power within Venezuela, receiving a call from Russia’s Vladimir Putin and accepting a visit from the Biden administration in early March. He also welcomed an International Criminal Court (ICC) office to Caracas after meeting with prosecutor Karim Khan, expressing “the doors of Venezuela were open” to the ICC team. The doors of Venezuela are open to returning nationals, as well. So far, 28,521 Venezuelans from 21 countries have returned under the “Plan Vuelta a la Patria.” With a deteriorated economy that is slightly rebounding, Maduro is pushing the propaganda that Venezuela is back in business and ready for foreign investment.

Investment that will undoubtedly come from dubious places. In the past couple months, Maduro has signed commercial agreements with Iran, Nigeria, Bolivia, Cuba, and Equatorial Guinea. Venezuela’s Foreign Minister Félix Plasencia took a trip to Bolivia in early May to sign several agreements and set up a potential trip by Nicolás Maduro to the Andean nation this summer.

With international support solidified, Maduro is focusing on destabilizing his neighbors, namely Colombia. As Russian forces move across Ukraine, foreign disinformation from the Maduro regime invades Colombia. Echoing Putin’s “denazification” argument for invading Ukraine, Venezuela likens their battle with Colombia for the “de-cocaine-ization” of the country. Diosdado Cabello underscored this on his program, El Mazo Dando, where he accused the Colombian Air Force (FAC) of partnering with drug traffickers along the border.

As Colombia readies for its presidential election on May 29, an earlier Colombian election is mired in fraud allegations. Although the left in Colombia did well in the March 13 legislative elections, winning more seats in the Colombian congress, leftist Senator Gustavo Petro initially made allegations of fraud but then retracted. An investigation was opened into the Registrar’s Office where, according to the Colombian National Registrar, Alexander Vega, more than half a million votes were found missing due to a “human error.” The software in question comes from the Spanish firm Indra Sistemas S.A. Curiously enough, Senator Petro traveled to Madrid, Spain in early February and spoke at an event where representatives of the public-private Spanish firm, Indra, were reportedly present. Senator Petro also met with the former president of the Spanish government, Jose Luis Rodriguez Zapatero, and the current President Pedro Sanchez on his trip to Spain, the second in less than one month for the Colombian senator.

Elsewhere in the region instability is on the rise. Protests have erupted in Peru, Bolivia, Paraguay, Ecuador, and Guatemala. The state of affairs is only made worse by the looming food security crisis in Latin America exacerbated by shortages of wheat and fertilizer due to the war in Ukraine.

Russia’s brutal invasion of Ukraine rages on past the two month mark and the lasting effects in Latin America are rising food prices. Still reeling from the economic effects of the pandemic, Latin America is on the verge of a food insecurity crisis. This state of affairs likely prompted six Latin American nations to push a proposal to exclude fertilizer from the U.S. and international sanctions against Russia for its invasion of Ukraine.

At the same time, Russian and Ukrainian migrants are flocking to Tijuana en route to the United States. According to CBP data, encounters of Ukrainians and Russians at the border have increased 753% between FY2020 and 2021. Monthly encounters have surpassed 2,000 since September 2021, the highest levels on record for the last 15 years. And unsurprisingly, just halfway through, FY2022 encounters have already surpassed last year’s total. Since 2020, CBP reported 27,670 encounters with Ukrainian refugees. Almost half of which have been recorded this fiscal year.

Further south, Colombian authorities arrested two Russian nationals in Bogota for a massive money laundering scheme that involved 77 people and moved more than $146 million dollars since 2018. Sergei Vagin, a Russian national codenamed “Servac” was arrested on March 30, along with five Colombian citizens accused of organizing the money laundering scheme known as “pitufeo” by using Russian sports bettors through bank accounts of local Colombians who exchange the funds for cryptocurrency and take the funds abroad. At the same time, a Russian woman was arrested in Suba, a neighborhood in northern Bogota, with computers and memory sticks that had documents and information pertaining to Russian espionage and counterintelligence techniques.

The combination of the Russian woman’s profile and Sergei Vagin’s pattern of life prompted allegations that the massive money-laundering scheme could have helped fund the violent national protests last year and/or increased destabilization in Colombia’s elections this year.

In late February, Israeli Defense Minister Benny Gantz raised concern about Venezuela’s Iran-supported drone program and the shipment of Iranian precision-guided munitions (PGM) to the Maduro regime. Venezuela has adopted Iranian drones for military purposes for more than a decade. Initially focused on surveillance and reconnaissance, the evolution of Venezuela’s military drone program will likely see ballistic units attached to the UAVs being used on its borders.

More recently, a high-level Iranian delegation, headed by its Petroleum Minister Javad Owji, traveled to Caracas and Managua in early May to sign various cooperation agreements in energy and agriculture. According to media reports, senior Iranian defense officials and IRGC officers accompanied this delegation to Venezuela and Nicaragua.

Aside from energy deals, Iran also seems to be triangulating with Russia on fertilizer trade to South America. In late February, Brazilian Minister of Agriculture Tereza Cristina traveled to Iran to negotiate a business agenda on fertilizer, specifically imports of Iranian urea. At the same time, President Bolsonaro traveled to Moscow where Russian producers promised to double their sales to Brazil. While attempting to work around the sanctions, discussions are underway with the United States for a waiver that would allow Brazil to increase trade with Iran.

Also increasing is Iran’s diplomatic and cultural engagement with Latin America. The 40th anniversary of the Iranian Revolution in February gave the Islamic Republic reason to host several cultural events across the region. While Bolivia and Venezuela’s president, along with the Mexican Foreign Ministry, were quick to congratulate Ayatollah Ali Khamenei on the anniversary, Iran’s Ministry of Culture and Islamic Guidance along with Al Mustafa International University based in Qom, Iran started hosting international seminars named Cátedra Libre Qassem Soleimani. The Spanish seminars, named after the slain Qods Force commander, are organized at the Universidad Bolivariana de Venezuela (UBV) and are building ties to other universities in South America, namely in Bolivia and Argentina.

In recent months, China is solidifying nuclear deals and gaining greater access to Lithium deposits in South America. Energy deals have always been a key part of China’s economic influence throughout Latin America and now it seems it’s setting its sights on the Southern Cone.

In Argentina, the Alberto Fernandez government is trying to renegotiate the deal it struck with China in February for an additional nuclear power plant. Now, instead of 83% funding, Argentina is pushing for 100% of the 8.3 billion dollar project to come from China. The new nuclear plant, Atucha III, will be constructed on the same site as the existing plants near the town of Lima in the Buenos Aires province.

In Chile and Bolivia, China is using state-owned or -controlled firms to increase its stake in lithium deposits, and eyes Mexico whose government is seeking to nationalize the mineral known as “white gold.” This includes partnering with state lithium company Yacimientos de Litio Bolivianos for a variety of pilot projects in the country’s reserves. While a Chinese firm, Chengxin Lithium, increases its stake in Lithium Chile to more than 10 percent, giving it a larger stake in the board of directors.

In Peru, China is running into problems with the indigenious communities in the Apurímac Region in the south of the country. On April 20, Chinese mining firm MMG announced it will halt activities at Las Bambas copper mine due to safety concerns stemming from a group of 130 people who had been camping on the property since April 14.

China is also taking a page from Iran’s playbook with the expansion of its Confucius Institutes across the region. As it stands, there are institutes in 23 countries in Latin America. In Ecuador, enrollment at the center at San Francisco de Quito University increased from 40 to 300 students.