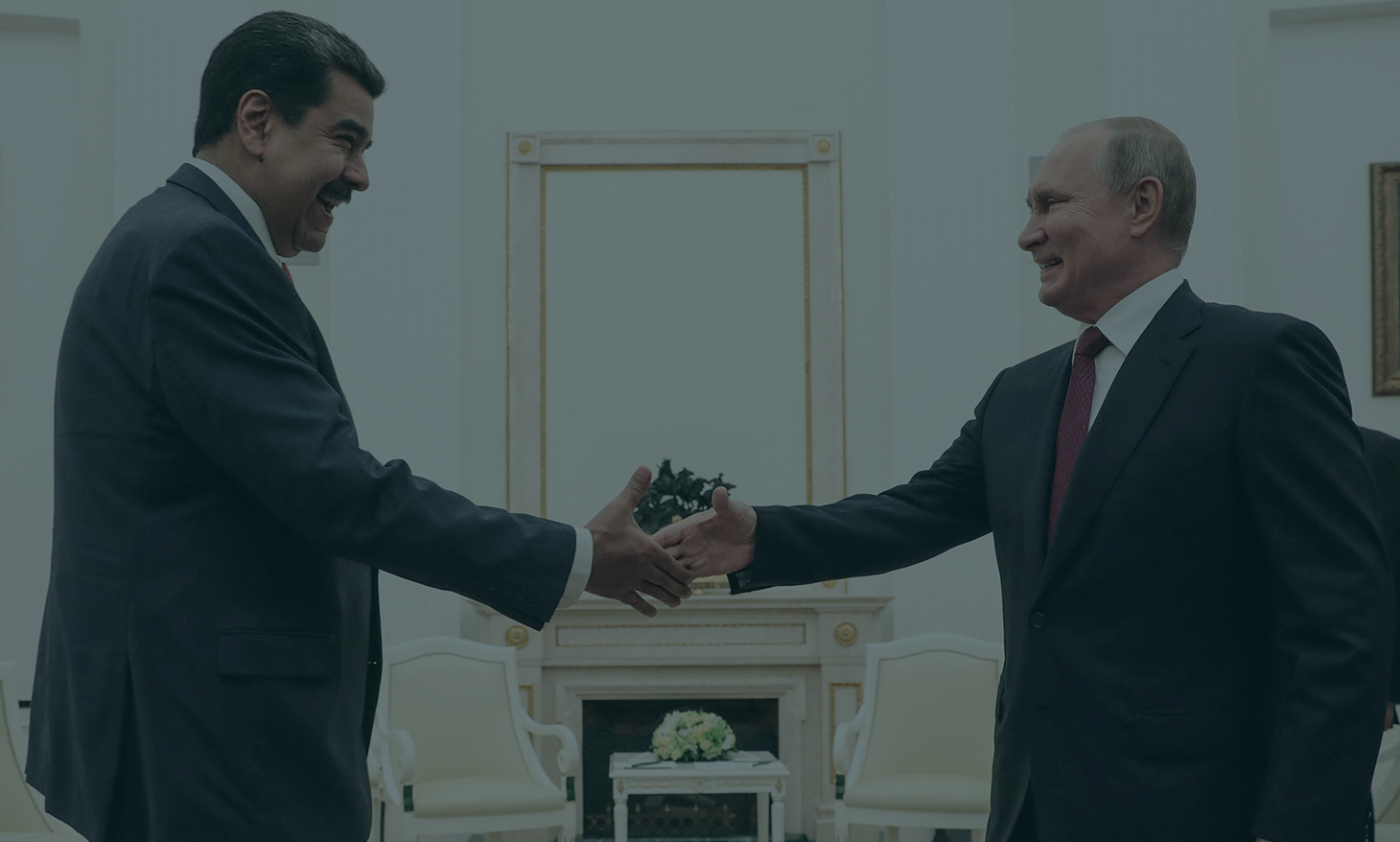 While the world watches Russia’s military movements on the Ukraine border, Vladimir Putin has been busy building leverage in Latin America. The recent arrival of 68 Russian military “technicians” and advisors to Venezuela in January precipitated the mobilization of the Maduro regime’s military forces to the Apure State, near the border, opposite Colombia’s Arauca province. Moscow’s ambassador in Bogota assures President Ivan Duque that the Russian military presence in Venezuela does not threaten Colombia, nor will the Russian weapons systems fall into the hands of illicit actors and terrorists operating on the border. A promise that will be difficult to keep considering the close ties between Venezuela’s Maduro regime and illegal armed groups and civilian militias.

Russia and China’s increased influence in Latin America prompted a new bill (S.3589) from Senator Robert Menendez (D-NJ) and Senator Marco Rubio (R-FL), both senior members of the Senate Foreign Relations Committee. The bipartisan bill, titled “Western Hemisphere Security Strategy Act of 2022”, proposes an increase in bilateral and multilateral security cooperation to counter China and Russia’s malign influence in Latin America and the Caribbean. If passed, the Biden administration will have six months to present a multi-year strategy to Congress for the Western Hemisphere, then another 90 days after that to begin implementing such strategy.

Notably left out of the Senate bill is the Islamic Republic of Iran. While Russia leads the new nuclear negotiation with Iran, the two authoritarian regimes from Moscow and Tehran increasingly provide technical military assistance to Venezuela’s Maduro regime. But Iran’s enduring partnership with Venezuela is not confined within Venezuela’s borders.

For almost a decade, SFS has warned about an immigration security scheme by Tehran, Havana, and Caracas providing logistical support to suspected terrorists from the Middle East. A threat that is now close to home.

On Sunday, February 13, Panamanian immigration deported 10 Iranian nationals with false German residence cards arriving at the Tucuman International Airport on a flight from Caracas, Venezuela. The Iranians were reportedly headed to Punta Cana, Dominican Republic. While this case does not involve fraudulent Venezuelan documentation, nor is it known if these Iranians were on any terrorist watchlist, another case from last year does.

Issam Bazzi, a Lebanese-Venezuelan dual national, arrived at the U.S. southern border in November 2021 crossing the Rio Grande into Texas after taking a flight from Caracas to Monterrey, Mexico. The FBI flagged him for having “high derogatory information” and ICE said Bazzi should remain in custody as he awaits his immigration trial because he posed a flight risk. DHS headquarters reportedly overran this decision in December and now, according to local media reports in Michigan, Bazzi is living in Dearborn, a city known to have Hezbollah supporters within its population.

The year began with intensifying conflict in Arauca, on the Colombia-Venezuela border. By February 12, there were a reported 67 deaths from the violence in Arauca prompting the Colombian Army to deploy two battalions to the border. As a faction of the FARC dissidents, known as the “Martin Villa” 10th Front, engage in intense fighting with the ELN, the violence, while undesired, is unsurprising. Colombian President Ivan Duque remarked:

“When you have a border where on the other side there is a country that protects and gives space and all the oxygen to terrorism, of course, the territory is exposed to high levels of risk.”

Risks that are aggravated by malign external actors. Iran and Russia’s technical military support to Venezuela’s Maduro regime has been mobilized near the border, in the Apure State, for a military exercise called the “Bolivarian Shield” (“Escudo Bolivariano”). Much like Putin has done in Kazakhstan and Belarus, Nicolás Maduro uses military exercises as a pretext for troop movements and mass mobilizations, as well as propaganda. Meanwhile, the Maduro regime ramps up threats against opposition members while clamping down on the Venezuelan press, namely El Nacional, one of the last remaining independent newspapers in Venezuela.

In Nicaragua, the illegitimate inauguration of dictator Daniel Ortega on January 10 presented an opportunity for a rogue’s gallery of authoritarian leaders to travel to Managua, which included Cuba’s Miguel Diaz-Canel and Iran’s Vice President for Economic Affairs, Mohsen Rezaee, who has an Interpol red notice for his role in the 1994 AMIA attack in Argentina. Neighboring Honduras also held an inauguration on January 27 for new President Xiomara Castro, attended by Maduro’s Foreign Minister, Felix Plasencia, and the former Venezuelan Minister for Women and Gender Equality, Margaud Godoy, who was appointed as the new ambassador to Honduras.

Further south, in Peru, President Petro Castillo struggles to maintain a consistent cabinet, having to reshuffle his ministers for the third time in six months. Since taking office last July, Castillo has had four prime ministers, three foreign ministers, and two finance ministers. But the latest resignation of his prime minister came after a recent interview with CNN en Español’s Fernando Del Rincón, where President Castillo alluded to opening the door for Bolivia to regain access to the sea. Bringing into question the influence of Bolivia’s Evo Morales, who has visited Peru several times in the last six months, and shining light on the human rights record of the Arce government.

The trial of former President Jeanine Añez set to take place in February was suspended after a group of 21 former Latin American presidents asked the United Nations to visit Añez and investigate potential abuses of power during her incraceration.

While the world watches Russia’s military movements on the border of Ukraine, the military support Moscow provides to Venezuela’s Maduro regime came to light during a press conference on January 13. Responding to a reporter, Russia’s Deputy Foreign Minister Sergei Ryabkov warned that Russia would not rule out the deployment of “military assets” to Venezuela and Cuba if the Ukraine crisis intensifies. Those Russian “military assets”, however, have already been deployed to Latin America.

This was confirmed in Colombia when Defense Minister Diego Molano, citing intelligence sources, said that Russia’s military support to Venezuela is on their border opposite Colombia’s Arauca province. The support includes 68 Russian military officials who arrived in Venezuela in January for the supposed maintenance of the Sukhoi Su-30.

The Colombian government subsequently held a meeting with the Russian ambassador in Bogota, Nikolay Tavdumadze, who assured President Duque that Russian military equipment in Venezuela would not be used to attack Colombia or fall into the hands of illicit actors and terrorists operating on the border. A promise that will be difficult to keep considering the close ties between Venezuela’s Maduro regime and illegal armed groups and civilian militias.

High-ranking U.S. officials took a two-day visit to Bogota on February 7-8 to alert the Colombian government of risks by external actors trying to meddle in upcoming elections in March and May. While no specific external actor was named, El Tiempo published an article, citing Colombian intelligence, that several wire transfers from Russia totaling 30 million pesos per day (approximately US $7,500) hit the bank accounts of dozens of Colombian nationals who meet at a local safe house in the Rosales neighborhood of Bogota. These small wire transfers have intensified as the March 13 legislative elections approach.

In Moscow, Vladimir Putin hosted high-level presidential visits in February from Argentine President Alberto Fernández and Brazilian President Jair Bolsonaro. The former, President Fernández, offered Argentina as the “gateway” for Russia to expand its presence in Latin America. While the latter, President Bolsonaro seeks agribusiness and fertilizer deals at a time when Russia is threatening its European neighbors.

An international incident was sparked in January when Iran’s Vice President for Economic Affairs, Mohsen Rezaee, touched down in Managua for four days to attend Daniel Ortega’s inauguration and increase Iran-Nicaragua bilateral cooperation. Rezaee, who is wanted for his role in the 1994 AMIA terrorist attack, skirted an international arrest warrant from Argentina with the help of Nicaragua but also because of the passivity of the Alberto Fernandez government. A similar incident occurred in 2011 when Ahmad Vahidi, former Iranian defense minister and current interior minister, made a hasty visit to Bolivia disregarding an INTERPOL red notice.

Since 2011, Bolivia has grown to become one of Iran’s top strategic partners in Latin America. This was exemplified on February 11 when Bolivian President Luis Arce made a public declaration on Twitter supporting the Iranian revolution on its 43rd anniversary.

Behind the scenes, bilateral relations are growing with a new Iran-Bolivia Joint Chamber of Commerce to be activated in a couple of months and a direct flight from La Paz-Tehran in the works. Complementing the Caracas-Tehran direct flights set to commence in March.

Recently, a Bolivian journalist reported on a trip to Caracas last year by Bolivian President Arce’s eldest son. Accompanied by a private entourage, which included an Iranian national, Luis Marcelo Arce Mosquiera reportedly began paperwork in April 2021 to place an important fertilizer plant in Cochabamba, the Bulo Bulo Urea and Ammonia Plant (PAU), under the control of Venezuela’s Maduro regime.

Almost one year later, Iran is active in Venezuela’s petroleum and petrochemical industry, recently sending its largest shipment of crude to Venezuela on January 28. Shortly after the delivery, Venezuelan Ambassador to Tehran Carlos Antonio Alcala Cardones spoke with Tehran Times to laud the Iran-Venezuela strategic cooperation and stated that “in security and defense cooperation, we [Venezuela] have the freedom to buy Iranian weapons systems.”

China’s strategy in Latin America has stayed consistent, engaging in infrastructure and energy deals throughout the region. In 2022, Argentina has been a primary target. In mid-January, Argentine President Alberto Fernández assumed the presidency pro-tempore of the Community of Latin American and Caribbean States (CELAC), positioning the regional political bloc as a China-led alternative to the OAS.

Shortly after, on February 6, President Alberto Fernández visited Beijing to celebrate the 50th anniversary of diplomatic ties between Argentina and China and to officially join the Belt and Road Initiative.

The burgeoning ties between Beijing and Buenos Aires include a Chinese mining firm, Zijin Mining Group Co Ltd that has already agreed to invest $380 million to construct a lithium carbonate plant in Argentina and China National Nuclear Corp (CNNC) has also signed a contract in Argentina to build the $8 billion Atucha III nuclear power plant, reviving a deal that had been stalled. Furthermore, next month, an Argentine military delegation will travel to China to discuss a bilateral defense agreement and the potential purchase of Chinese aircraft.

Elsewhere in the region, Chinese firm Sinohydro Bureau plans to build a gas-powered energy plant in Bolivia’s eastern Santa Cruz department and China’s Great Wall Motor will invest $1.81 billion to build electric vehicles in Brazil. As future infrastructure projects are being negotiated, Ecuadorian President Guillermo Lasso traveled to China on February 5 to negotiate his country’s debt with the Asian giant. In addition to a new debt deal, Lasso is looking to secure a free trade agreement with China.