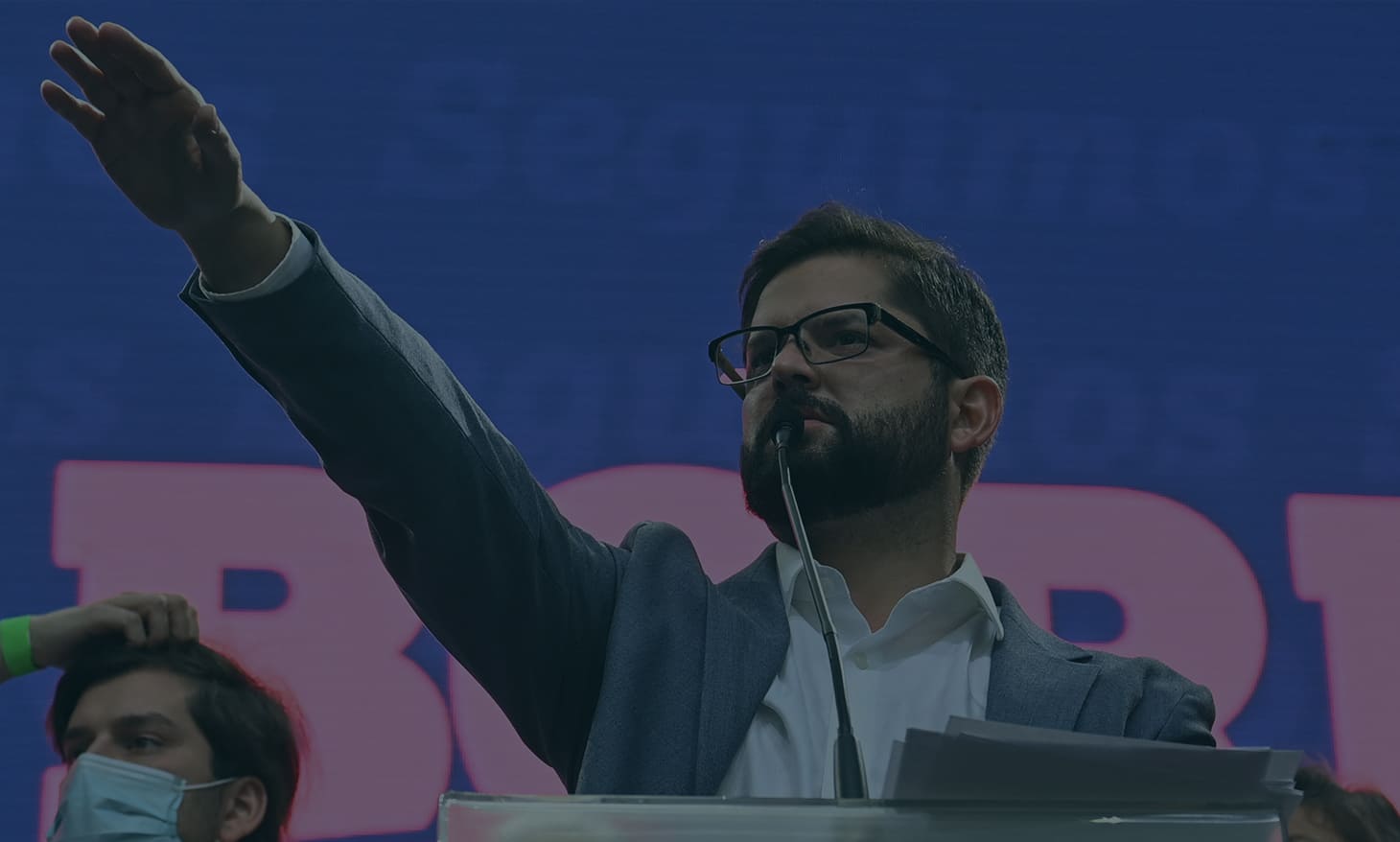 Last year’s super-election cycle in Latin America opened up new opportunities for socialist leaders and their extra-regional allies. President Pedro Castillo made an irregular visit to Beijing’s embassy in Lima shortly after being inaugurated as Peru’s president. Tehran’s state-sponsored cultural center in Santiago voiced support for Chile’s President-elect Gabriel Boric. And Moscow and Managua strengthened ties on the eve of President Biden’s Summit for Democracy, by welcoming an official Nicaraguan delegation to Moscow that was headed by the two sons of Daniel Ortega and Rosario Murillo.

A new socialist, authoritarian wave is rising in the region in 2022, pushing Latin America to an inflection point. Russia, Iran, and China are capitalizing on these new opportunities.

China is rapidly advancing infrastructure projects in Latin America, including its massive mega-port in Chancay, Peru, and a potential 15,000-kilometer subsea cable to Chile. Russia’s military exports are sprawling from Venezuela to the rest of the region, with high-level talks underway between Montevideo and Moscow’s Military-Industrial Company (ВПК). And Iran is preparing for the third official visit of Venezuela’s Nicolás Maduro to the Islamic Republic, later this month.

Starting 2022, the Venezuelan regime is in an advantageous position, having withstood the “maximum pressure” from the United States and successfully fracturing the opposition’s coalition. Maduro has now set his sights on strengthening ties with the Middle East, as expressed in a recent interview on a Lebanese news network, stating: “we have to do much more to unite [Latin America and the Arab world] spiritually, culturally, politically.”

Maduro is not alone, as the once fledgling ALBA bloc is reinvigorated by the emergence of new socialist leaders in Latin America. The 20th summit of the Bolivarian Alliance, held in mid-December in Havana, Cuba, rattled off a list of progressive goals for the region in its final declaration, to include “fostering cooperation … [with] countries outside the region and international organizations, under the principles of respect and non-interference in the internal affair” – a vague reference to the VRIC.

On January 5, the Venezuelan constitutional mandate of Interim President Juan Guaidó was extended for one year. Nonetheless, the Venezuelan opposition coalition, known as the G4, has fractured and Guaidó’s in-country support is waning. Globally, however, Guaidó still maintains recognition by the United States and the UK, among others, which gives him control over Venezuela’s gold reserves held by the Bank of England and the U.S. humanitarian and health assistance to Venezuela.

While Guaidó has lifelines, they are few and far between. His brave and courageous effort to regain democracy for Venezuelans has essentially failed.

Meanwhile, the Maduro regime continues to consolidate its power. After another round of sham elections in November, this time at the local and legislative levels, the regime took over the only institution the opposition had left: the National Assembly. A contested election in Barinas, the home state of the late Hugo Chávez, gave a rare electoral victory to the opposition but only to install a false of confidence and legitimize the false election held last November. Now, Maduro is focused on advancing the regime’s international agenda with an upcoming trip to Tehran.

Venezuela’s Maduro regime is further emboldened by the rise of new socialist leaders in Latin America. 2021 saw leftist candidates win presidential elections in Chile, Peru, and Honduras, as authoritarian leaders advanced in El Salvador and Nicaragua. The prospect that Chile’s President-elect Gabriel Boric and Honduras’ President-elect Xiomara Castro will join the growing list of friendly nations to the Bolivarian revolution has placed the momentum on the side of socialists heading into the two most important regional elections in 2022: Colombia and Brazil.

Bolivia’s Evo Morales is also capitalizing on the new socialist wave in Latin America by propping up a new regional body to replace the defunct Union of South American Nations or “UNASUR” with a populist indigenous version called “RUNASUR,” or the Union of the People’s of South American Nations. The new RUNASUR was supposed to have its second annual meeting in Cusco, Peru, toward the end of December only to be rescheduled due to backlash from Peruvian legislators and retired military. Even so, socialist leaders in Latin America were able to gather earlier in the month in Havana, Cuba, for the 20th summit of the Bolivarian Alliance of the Americas (ALBA), a once fledgling regional body that is making a come-back because of the socialist, authoritarian wave sweeping the region.

Russia’s strategic engineered migration from Belarus to Poland last year created a border crisis that challenged the European Union. Russia’s military buildup on the Ukrainian border this year prompts fears of an invasion and further destabilization of Eastern and Central Europe. The strategic know-how to manipulate migration and induce border conflicts is a capability Russia is exporting to the Western Hemisphere.

On the Colombia-Venezuela border, SFS reported last year the presence of Russian military contractors and Russian-made drones in Arauca and Cucuta, two hotspots on the border. This year, new borders may be in their sights. On December 14, two vehicles carrying 18 Russians attempted to speed past the San Ysidro Port of Entry in California. This is after seven Russians tried to run across the border at Otay Mesa Port of Entry in California in November.

Latin America’s neo-socialist wave may open up new engagements for Russia in the region, as Moscow shore’s up support from traditional allies.

In early December, a Nicaraguan delegation headed by Daniel Ortega and Rosario Murillo’s two sons and Argentine President Alberto Fernandez met with Russian diplomats in Moscow to discuss strengthening relations between the respective countries. Russian Foreign Minister Sergey Lavrov stated that Brazil’s membership in the United Nations Security Council will create new opportunities for the countries to boost cooperation during a meeting with his Brazilian counterpart while Ecuador’s President Guillermo Lasso is expected to visit Moscow early in the new year to strengthen ties.

Russia’s regional outreach has a militaristic angle, as well. The country’s efforts to export military hardware around the world have intensified. Russia’s Military-Industrial Company is already in talks with Uruguay and Venezuela to export armored personnel carriers (APCs) and other armored vehicles. Meanwhile, the Peruvian government put into force an agreement on mutual protection of classified information within its technical-military cooperation with Russia.

On December 26, 2021, Al-Mayadeen, a pan-Arabist news network based in Lebanon, released an hour-long interview with Venezuela’s Nicolás Maduro, whom they also awarded as “person of the year.” In the interview, Maduro mentioned the need for Venezuela to strengthen economic ties with Arab nations, and his enduring support for Syria’s Bashar al-Assad and admiration for Iran’s Supreme Leader Ayatollah Ali Khamenei. Maduro also stated that he will be visiting Iran “very soon.”

Preparations for Maduro’s trip to Tehran were already underway, with several official phone calls and state visits from Venezuelan officials to Iran and vice versa. This includes initial discussions in November 2020 to eliminate visas and increase flights between the two countries, followed by a meeting in Tehran in October 2021 between the respective foreign ministers of each country. An Iranian delegation then traveled to Caracas last November to observe the legislative elections in Venezuela, including a high-level meeting with Venezuela’s vice president on the eve of election night.

A phone call by Iranian President Ebrahim Raisi on December 6, solidified Maduro’s upcoming trip to Tehran, who is expected to sign a 20-year deal between Iran and Venezuela that mirrors the 25-year strategic cooperation agreement between Iran and China inked in 2020.

While Venezuela will continue to be the base for Iranian operations in Latin America, 2022 will likely see Iran expand its outreach throughout the region, namely with members of the Bolivarian Alliance.

On August 3, 2021, the ALBA’s Secretary-General, Sacha Llorenti, met with President Raisi in Tehran prior to his inauguration. During the meeting, the new Iranian president stated that Latin America is a foreign policy priority for the Islamic Republic.

With Iran nuclear negotiations in Vienna ramping up again, Iran’s international outreach is increasing. One roadblock in Latin America could be Colombia, a new member of the IAEA Board of Governors, whose president and defense minister traveled to Israel in November to shore up bilateral ties. A diplomatic snafu ensued after the trip when Colombian Defense Minister Diego Molano stated Israel and Colombia’s “common enemies” are Iran and Hezbollah. Iran took advantage, by amplifying its propaganda in the Colombian press to promote false narratives leading up to January 3, 2022, the second anniversary of the death of Qods Force commander, General Qasem Soleimani, whom Iran portrays in Latin America as a heroic martyr.

Ecuador’s ambassador to Washington recently told Axios that the “U.S. is losing Latin America to China without putting up a fight.” Her frustrated interview revealed that without more attention, even “U.S.-friendly countries will conclude that we’re still just the backyard.”

The Ecuadorian ambassador’s words hold a dangerous truth in that even U.S. allies in Latin America are susceptible to China despite not having intentions of shifting its foreign policy.

This is apparent in a $50 million loan from the Asian Infrastructure Investment Bank (AIIB) to Ecuador and a bilateral forum between Brazil and China to increase cooperation in agricultural biotechnology. China’s wolf warrior diplomacy with U.S. allies in Latin America comes as it advances its diplomatic onslaught to isolate Taiwan. Prior to seizing the former Taiwanese embassy in Managua, the Ortega-Murillo regime broke Nicaragua’s long-standing diplomatic ties with Taiwan in early December, joining El Salvador, prompting Honduras, and cornering Guatemala in favor of China.

And as U.S. allies reluctantly move closer to China, anti-American actors in the region eagerly build ties and improve cooperation. Cuba recently signed a Belt and Road Initiative deal with China and will participate in the fourth China International Import Expo (CIIE). Further south Argentina creeps closer to China, including negotiations on the “2021-2025 Space Cooperation Plan,” which encompasses different areas of cooperation to become strategic partners in Argentina’s lithium industry.

The new incoming president in Chile could also mean enhanced relations with China. The South American country’s plans to build a 15,000 kilometer subsea cable to send solar energy to China could be the next big project, forging deeper ties between the two countries. China, which is Chile’s top trade partner, is already heavily involved in the lithium industry in the Southern Cone.