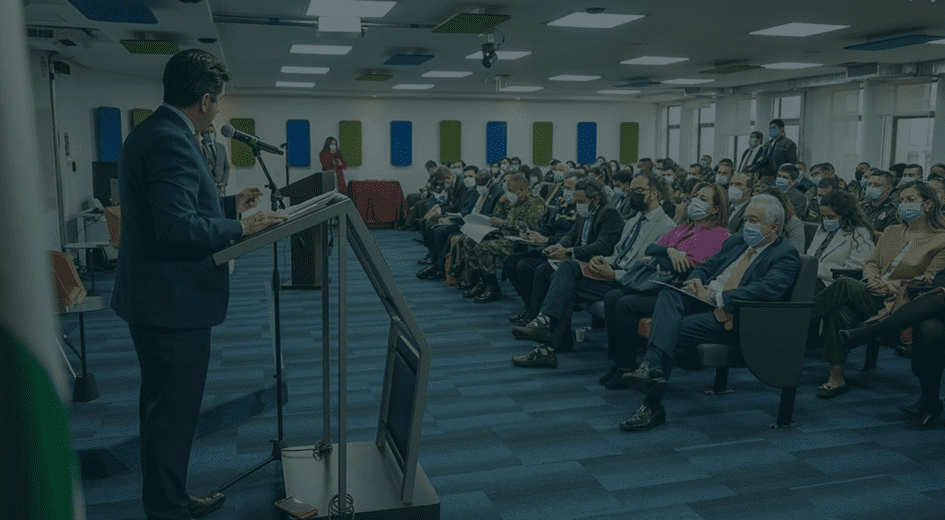 Remarks by Joseph M. Humire at the launch of the 2021 Human Rights and Public Security Report

Good morning. A warm greeting and special thank you to the Minister of Defense, the honorable Diego Molano Aponte; the director of the Universidad del Rosario, Dr. José Alejandro Cheyne Garcia; General José Luis Vargas Valencia, director general of the National Police; General Luis Fernando Navarro, General Commander of the Armed Forces of the Republic of Colombia; and everyone who joins us today for this important event.

I want to begin by congratulating the Ministry of Defense and the Observatory of Human Rights and National Defense for preparing and publishing this important report. A report and initiative by Colombia’s Ministry of Defense that is urgent and necessary.

The report is necessary because part of the governance process in a representative democracy is self-criticism. The ability to recognize mistakes, correct those mistakes, and improve and move forward—is a sign of strong institutions. The launch of the 2021 Human Rights and Public Security Report is a part of this self-criticism and I congratulate Colombia for publishing this report.

For me, as an analyst, and for the United States, it’s important that there is an extensive official document with verifiable data about the situation of human rights and defense in Colombia to help the international community understand what happened between April and September 2021 in the more than 15,000 activities that took place in 860 municipalities during last year’s national protests throughout Colombia.

It is extremely important to not conflate those that expressed their constitutional right in Colombia by protesting peacefully about their legitimate grievances—with other subversive actors who took advantage of the protests to steer them towards extreme violence and vandalism. It is equally important to inform the public in detail about the actions taken by the Colombian police and military to protect those peaceful protestors.

Protecting the legitimacy of law enforcement institutions, in particular the National Police and the Armed Forces, is the center of gravity of an asymmetric conflict against subversive actors and organized criminal and insurgent groups that perpetuate the most serious human rights violations in Colombia or in any country for that matter.

The 2021 Human Rights and Public Security Report provides extensive documentation of the institutional achievements of the Ministry of Defense against the structures of organized crime in Colombia. An effort that I am sure many in my country, in the United States, do not know about at a public level. This document gives credibility and arguments with verified data to U.S. policymakers and government officials who want to ensure that the strategic alliance between the United States and Colombia is not affected by misinformation or disinformation.

In the 21st century there is no democracy in the world that is not affected by disinformation.

Often, well-crafted disinformation campaigns go undetected until after lies and false narratives enter the public consciousness—and then it is much more difficult to correct once a lie has been amplified thousands of times. Part of fighting misinformation and disinformation is increasing transparency.

Transparency is vital to build trust between public institutions and the citizenry. Public opinion is a tool for the citizens of democratic countries to ensure that public officials are working in favor of law and order and human rights.

This report helps build that transparency and trust, and the Observatory is an excellent initiative to strengthen trust between the Colombia’s law enforcement and defense institutions and its citizens. Reading the report makes me very happy to know that other democracies in the world such as Germany, Chile, and Israel have bilateral agreements with Colombia on defense and security with a focus on human rights and international humanitarian law.

The world is in very delicate and turbulent times. The human rights of various peoples and minority groups are increasingly threatened in many countries around the world. Autocratic, and even totalitarian, regimes are increasing their power and threatening the international order, taking away the freedom and human rights of the people.

In this global situation, it is important that democratic countries unite in favor of not only interests, but also in favor of values ​​that transcend humanity. Human Rights and Individual Liberty are those values. No country is perfect. We have all made mistakes.

The United States has also made mistakes in the past regarding human rights. But I have confidence in the institutions of my country because I know that institutions from likeminded countries, like Colombia, accompany the U.S. in this global effort to defend human rights. This reminds me of a quote by a prominent, historical figure in the U.S. and great defender of human rights and civil liberties, who reminded us of this challenge. I am referring to Dr. Martin Luther King Jr. who said:

“Injustice anywhere is a threat to justice everywhere”

The 2021 Human Rights and Public Security Report and the Observatory of Human Rights and National Defense of the Ministry of Defense are part of advancing justice in Colombia for the civilian population that were victims of violent actions, but also for the 148 men and women, military and police officers in Colombia who gave their lives in 2021 to maintain public order and human rights in their country. Thank you!