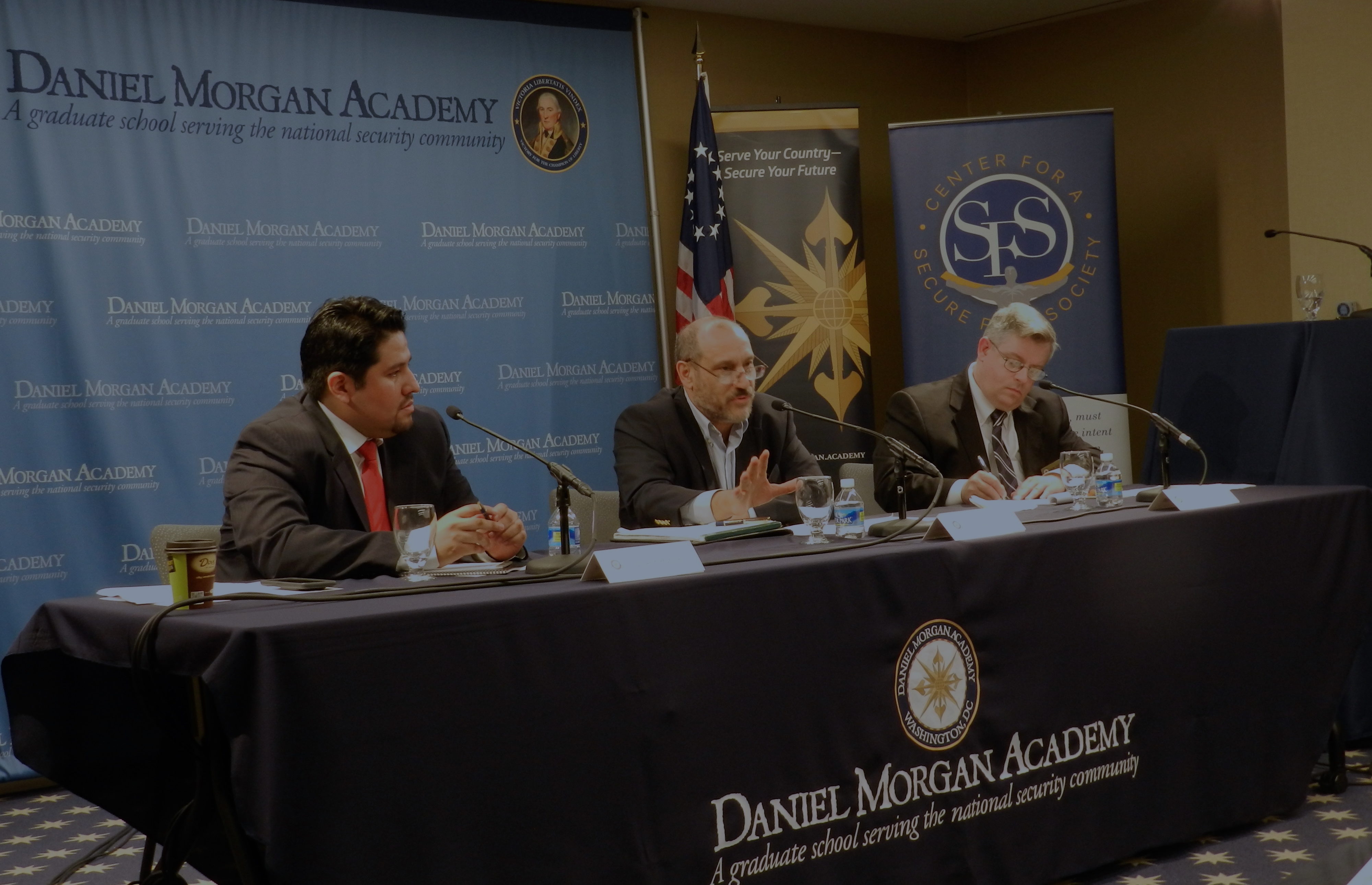 The inaugural 2016 Western Hemisphere Security Forum held in Washington, D.C. and co-sponsored by the Center for a Secure Free Society (SFS) and the Daniel Morgan Academy (DMA), brought together several leading regional experts and security scholars for a day-long discussion about the many issues affecting governance and the rule of law throughout the Americas.

In opening remarks DMA president, Ambassador Joseph DeTrani, declared that U.S. policymakers are not paying enough attention south of the border, where criminal and terrorist networks are converging throughout Latin America and a growing influence of extra-regional state actors, such as Iran, Russia, and China is increasing. Amb. DeTrani set the tone of the conference by asking the critical question: “how are we to ensure more emphasis is placed on the U.S. Southern Security Perimeter?” According to Amb. DeTrani, the goal must be to “train the next generation of leaders that will handle these problems… [those] who will be carrying the torch forward.” After his opening remarks, Amb. DeTrani introduced the keynote speaker Ambassador Curtin Winsor, Jr.

In his keynote address Ambassador Winsor focused on the Anglo-sphere of North America, the U.S. and Canada, as the only nations in the Americas possessing real economic capital for investment. The rest of the region lacks sufficient capital and often relies on foreign investment to remain stable. Central America is among the most affected due to its struggling economies and prevalence of drug cartels, which corrupts almost every political entity in the region. Venezuela, a country on the brink of starvation and humanitarian crisis, is receiving an inadequate amount of attention from U.S policymakers. If neglected, the U.S. may face the real possibility of having to intervene in Venezuela, which may not be popular nor accepted through the rest of the region. Ambassador Winsor added that “the [region] is complicated and anything that may be done will be resisted by geographical, cultural, and trade patterns that don’t encourage change in these countries.”

Mr. Joseph M. Humire, Executive Director of the Center for a Secure Free Society (SFS), shed light on the Anti-Corruption Movement in Latin America. Humire explained the importance of globalization and the impact technology can have in educating the populace about corruption. To understand the nature of the chaos in Latin America, Humire believes we must first examine history for answers. Patterns of corruption in Latin American governments can be referenced from historical struggles and failed attempts to form democracies. While security issues present challenges for the U.S., forming relationships, particularly with Venezuela, can prove complicated. Neglect, however, has ushered in an even more pressing concern: further intervention from anti-US extra-regional state actors. China, Russia, and Iran are extra-regional sponsors determined to engage in “asymmetric warfare” to offset U.S. influence in Latin America. In speaking to the changing geopolitical landscape of the region and consequences for U.S. national security, Humire offered a chilling reminder that, “It’s not the hardest punch that knocks you out, but the one you don’t see coming. This punch could come from Latin America.”

Mr. Douglas Farah, Senior Visiting Fellow of the Center for Complex Operations of the National Defense University, echoed Humire’s concern but also stated that the changing political winds in Latin America provides the U.S. with an opportunity to reengage like-minded allies in Latin America. Mr. Farah, however, is not optimistic that the U.S. will seize this opportunity. He spoke at length on the issue of transnational organized crime in Latin America, and focused specifically on the concept of “criminalized states” as products of the Bolivarian construct. Farah informed that El Salvador is the newest country of concern in this regard, and that the gangs in the country are gaining political awareness while the state is becoming weaker.

Mr. Ilan Berman, Vice President of the American Foreign Policy Council, set the stage for further discussion on Iranian influence in Latin America, making key references to the long-term strategic objectives of the Islamic Republic. Berman reminded that Iranian activity in the region, dating back to the 1980s, directly resulted in the 1992 suicide bombing of the Israeli embassy in Buenos Aires, as well as the attack on the Asociación Mutual Israelita Argentina (AMIA) in 1994. Iran’s appeal to some disenfranchised populations in Latin America is a key strategy employed by the Islamic Republic as a means to garner international support. Berman stated that it becomes easy for individuals to rally “around a different faith if the State hasn’t served you well.” This appeal is evident in Latin America and is an interesting show of soft power by the Islamic Republic.

Dr. R Evan Ellis, research professor at the Strategic Studies Institute of the U.S. Army War College, has studied the waxing interest of Russia and China in Latin America for a number of years.  When Nicaragua became the first country in the Western Hemisphere to recognize the independence of breakaway Georgian republics South Ossetia and Abkhazia, this could have signaled to the Russian Federation that establishing a new alliance could prove fruitful. Furthermore, Dr. Ellis stated that “arms sales [serve] as a vehicle for engagement” for Russia and China, who have both taken advantage of this trade. From 2001 to 2013, Russia sold over $11 billion to Venezuela in arms and weapons sales. Similarly, China has invested over $124 billion in the region, largely in military sales and infrastructure investments, changing the geopolitical landscape of Latin America.

Mr. Fernando Menéndez, SFS Senior Fellow, captured the importance of the public debate on Cuba’s rapprochement with the U.S. and its interventionist history in Latin America, emphasizing Havana’s strong economic and political ties to Venezuela, Nicaragua, and Bolivia. Mr. Menendez emphasized Cuba’s role in the Community of Latin American and Caribbean States (CELAC), a regional organization that includes every nation in the Western Hemisphere except the U.S. and Canada. Furthermore, Cuba has strategically placed the blame for its economic shortcomings on the U.S. embargo, demanding $80 billion from the U.S. government. Mr. Menéndez responds by reminding that Cuba’s failing economy is by no means a product of the U.S. embargo which never restricted third party trade. Failed economic policies, not embargoes, account for underdevelopment, low living standards, and other challenges affecting the island.

Finally, Mr. Roger Pardo Maurer, the former U.S. Deputy Assistant Secretary of Defense for Western Hemisphere Affairs from 2001-2006, closed out the panel by explaining why the Western Hemisphere is strategically important to the United States stating: “we forget how connected we are to Latin America, and it is in mysterious ways.” Mr. Pardo Maurer outlined 500 years of U.S. history demonstrating the intricate ties the U.S. has with our southern neighbors and presented a paradox of U.S. domestic and foreign policy that must be understood to properly engage the region. His presentation serves as a reminder of how important cooperation between the U.S. and Latin America is for the present and future security and success of the region.

The conference ended with a plenary session recapping the major points from previous panel discussions. Moderated by Amb. DeTrani, the panelists were asked to provide closing remarks and the general consensus was that the “governments in Latin America do everything but their job,” as stated by Mr. Menéndez, providing neither basic security nor any substantial form of rule of law. Amb. DeTrani asked if the prospect for a peace agreement in Colombia is a sign of optimism for the region. The panelists were in agreement that the best advice for U.S. policymakers following the Colombian peace process is that “we should hope for peace but be prepared for the worst.” A grim and sharp wake-up call that resonated as the underlying tone of the 2016 Western Hemisphere Security Forum.